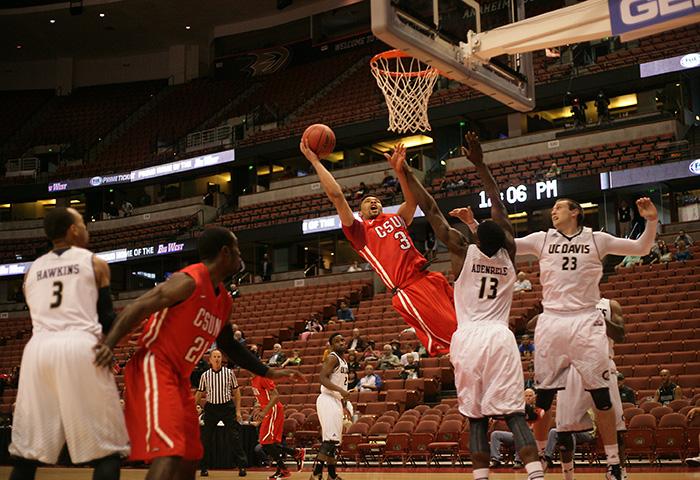 Senior Stephan Hicks fights to the basket agaist UC Davis during the first half of the Matadors qurater final game of the Big WEst Tournament on March 12 at the Honda Center. (Raul Martinez / Staff Photographer)

CSUN sophomore guard Aaron Parks walked off the floor of the Honda Center defeated, slumped in posture with a towel over his head.

In their match up with the University of California, Davis, the Matadors failed to preserve an 11-point second half lead in the quarterfinals of the Big West Tournament.

Once again, CSUN did not have the adequate amount of players to finish any runs, or the game with any type of effectiveness. This was due in large part to the lack of depth and options on the bench for head coach Reggie Theus.

“We just didn’t sustain the effort that we put in,” Theus said. “Defensively I thought we made some mistakes.”

The loss ended one of the most tumultuous seasons in CSUN men’s basketball history.

From the opening game of the season, the Matadors were behind the eight ball, as the team sat out an undisclosed number of players for an indefinite amount of time due to a potential violation of team and university policy.

As a result, CSUN lacked any type of depth and was forced to trudge through their difficult non-conference schedule, winning only four out of 15 games through the first two months.

The lack of options and fatigue began to take its toll on the Matadors, losing the next eight games by an average of 12 points per contest.

In several of those games, the Matadors found themselves competing and staying within striking distance of their opponent in the first half, but more often than not, they could not sustain runs in the latter parts of games.

The Matadors entered the Big West Tournament winning three out of their last five games, looking to upset the top-seeded Aggies, but the matchup proved to be a microcosm of the season.

In the post-game press conference after the Big West Tournament loss to UC Davis, Theus also hinted that the players who sat out this season would be poised to return.

“I think the future is pretty bright,” Theus said. “Because we had some pretty good players sitting out this year.”

Even though Theus is optimistic about his roster next season, the university has not found a resolution to the aforementioned investigation. And until there is some answer, none of those players can, or should, be relied on moving forward.

The trajectory and future of the program hinges on the impending result of the ongoing investigation, and whether or not they can come out of it unscathed.