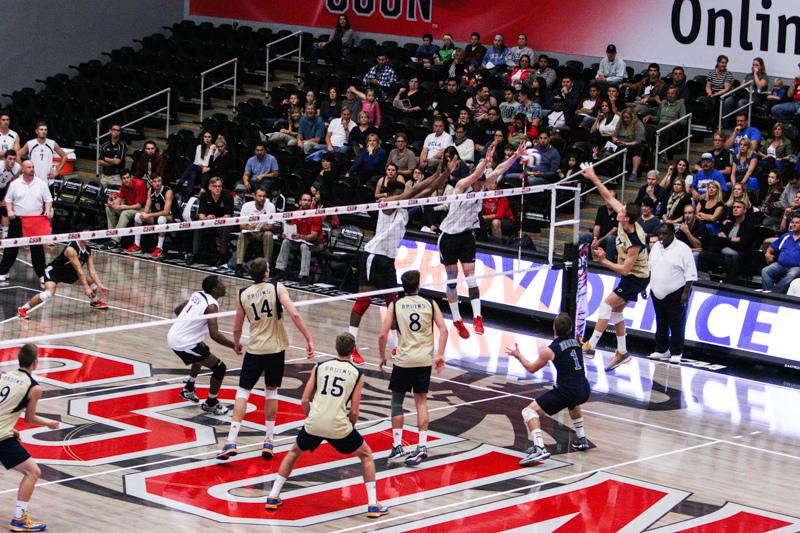 The Matadors (7-13, 4-10 MPSF) conquered the No 7 USC Trojans (11-7, 9-6 MPSF) 3-1 in their first match back from a six game road trip. Lately, CSUN has faced nothing but adversity with multiple injuries, but that was nowhere to be found on the court tonight.

The Matadors came out on fire in set one, taking an early 3-0 lead. Both teams went back and forth, with eight tie scores and just two lead changes. The Matadors remained ahead, until the score was tied at 18 and a USC kill turned the tides and put the Trojans on top. Back to back kills from CSUN (Sakaida then sophomore opposite Jakub Ciesla) put them back on top 20-19. From here on they didn’t give up their lead. A block from Ciesla and freshman middle back Josiah Byers took the set. The Matadors hit .321 to USC’s .192 and had 14 kills to the Trojans’ 11.

“They were great serving and great passing but ultimately we wanted it more and that’s all that matters,” Ciesla said.

Set two started out the complete opposite of the first. The Matadors gave the first four points of the game to USC; then steadily remained behind by five. Three back to back blocks at 10-14 turned the game around for the Matadors. USC no longer had the several point lead on them and at 17-18 a service ace from Ciesla tied it at 18. Then, tied at 19, a kill from Ciesla put the Matadors on top for the first time during the set. The Matadors would land on top just one more time, but the Trojans ultimately took the set. CSUN was out hit .088 to .276

“It’s not even about individual effort. It’s all about the team. Everyone’s mind set definitely changed after season went half way. And the second half is a new CSUN,” said Ciesla.

“This league is all about upsets. Anyone can win. It’s all about, you know how coach says ‘whoever makes the serves and whoever passes better’- we did that today,” Ciesla said.

The fourth set started off slow for the Matadors, but picked up quickly. The Trojans continued with their two point lead like in the earlier sets and the Matadors continued to fight back and not go away. A 16-17 kill by R-freshman opposite Arvis Greene Jr. tied it at 17 lifting the entire Matador bench, coaches and all, to their feet. This energized the fans and entire gym, creating a victorious momentum.

At 23-24, set point for the Trojans, Ciesla came in clutch with a kill tying the set at 24. Then a block from O’Gorman and Stevenson put the Matadors back on top and at match point. But then came a missed serve from Faulkner, once again tying the score this time at 25. Then came Ciesla, first with a kill, 26-25, then a service ace, 27-25 and the match.

“Guys stepped up when the time came and it really comes down to having fun and changing your whole mindset and (asking) what are you gonna do to win a game?” Ciesla said.

The Matadors return home Friday to play Cal Baptist at 7 p.m. in the Matadome.