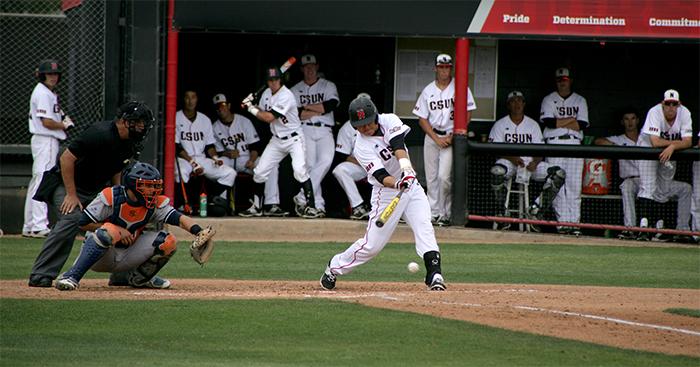 Chester Pak goes one for three in the day, but that one hit was a homerun that gave the Matadors the 4-3 edge versus Pepperdine University on March 17. (Raul Martinez/ Staff Photographer)

Senior right fielder Chester Pak solo home run in the bottom of the sixth inning lifted CSUN to a 4-3 win over the Pepperdine Waves on Tuesday afternoon at Matador field.

The Matadors improved to 15-5 on the season and have won four of their last five games.

The Matadors led 3-2 heading into the top of the sixth inning until Pepperdine tied the game at 3-3 after an RBI double against CSUN junior pitcher Rayne Raven.

Paks’ homer came in the bottom half of that same inning to give the Matadors a 4-3 lead, which ended up proving to be the difference in the ball game.

Raven earned his fourth of win of the season, as he pitched 6.2 innings, struck out five and gave up three earned runs.

CSUN sophomore closer Conner O’Neil pitched 2.1 scoreless innings to earn his fifth save of the season.

The Waves threatened to score in the seventh inning against O’Neil who came into the game in relief of Raven. With runners on first and second base with two outs, O’Neil forced Aaron Barnett to foul out to end the inning.

The top five hitters in the CSUN lineup remained hot, as they combined for eight hits, three RBIs and three runs.

The Waves had a chance to score in the bottom of the ninth after hitting a leadoff double off O’Neil, but he was able to retire the next three batters.

CSUN Baseball returns back to Matador Field on Thursday afternoon when it takes on Dartmouth for the start of a four-game series. First pitch is slated for 2 p.m.