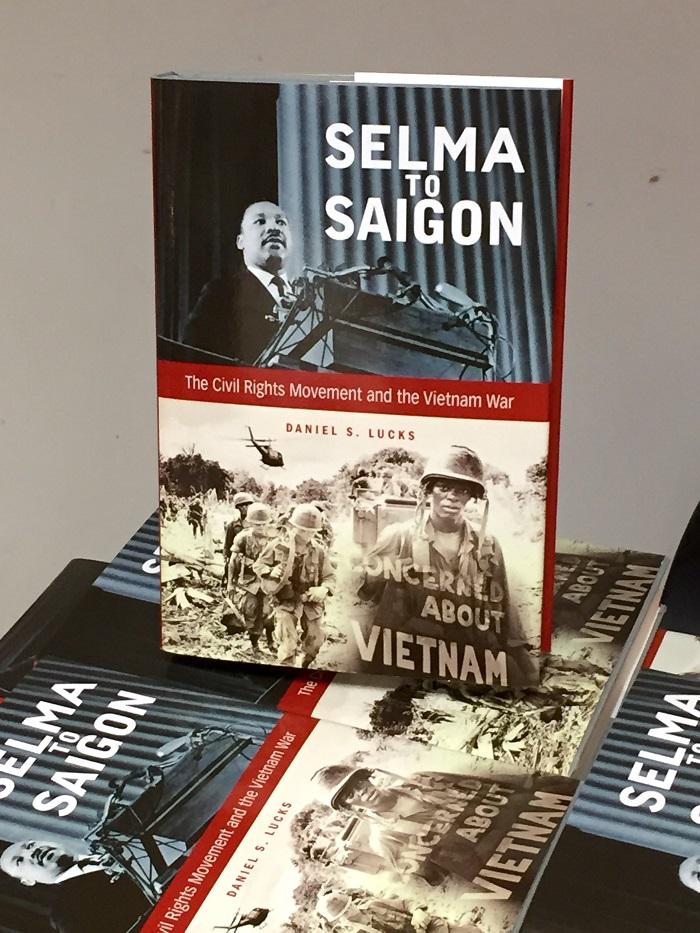 Daniel Lucks' book "Selma to Saigon" tells of the affects of the Vietnam war on the civil rights movement of the '60s. Photo credit: Nicolette Hinojos

Taking a new approach to lectures, Daniel S. Lucks spoke to CSUN students and staff on Thursday about the affects of the Vietnam war on the civil rights movement of the ’60s.

Lucks gave a brief history of the civil rights movement, not only with words but also with videos to illustrate his points. Lucks showed clips of the freedom riders, the Greensboro sit-in at Woolworth and the actions Bull Connor took on children making a peaceful protest.

There was a draft that affected everyone but mainly African Americans.

“They were drafted in higher numbers and died in disproportionate numbers as well,” said Lucks.

An example of this was when Muhammad Ali refused to be drafted due to his religious beliefs. In a video, Lucks showed the audience when Ali said that he is not going to go oversees and kill someone who is not his enemy. Ali said that his enemy was white people and why should he stand up for them if they don’t stand up for him.

Lucks said that Vietnam divided the nation where you were either for it or against it. The war was all people could talk about and was such a preoccupying subject that the civil rights movement was swept under the rug for the most part.

“The Vietnam War really took the wind out of everything,” said Lucks. “It diverted morale and furtive energy to the war and away from the Civil Rights Movement.”

The lecture felt more like a conversation than a two hour lecture and this is a reason why sophomore bio chemistry major, Alina Batool, liked the event.

“I’m not really interested in history, but this was interesting,” said Batool.

Through the videos and conversations, Lucks boiled down the overall point of his book. He not only thinks the impact of the war was corrosive to the civil rights movement but the impact the movement has on society today isn’t as big as it should have been.

“We are not in a post-racial age,” said Lucks. “We still have a long way to go.”