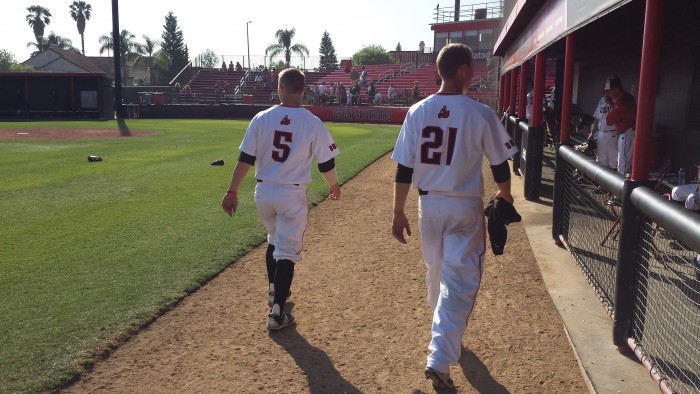 The pitching was stingy early, keeping the game tied at 1-1 through seven innings.

But a go-ahead two-run home run by senior right fielder Chester Pak, broke the game open in the eighth propelling CSUN to a 6-1 victory against Dartmouth.

“Usually when a new guy comes out of the [bull] pen, we say fastball and that’s pretty much what I was sitting on at that at bat.” said Pak about his home run. “Lucky enough, he threw a fast ball right in the zone for me to hit.”

Pak hit his second back to back go ahead home run in the past two games, but the Matadors in this game unlike the Pepperdine game, were able to add more runs after his home run.

In the same inning, junior shortstop Yusuke Akitoshi added an RBI and so did freshman center fielder Justin Toerner.

The pitching for the Matadors was also effective throughout the game.

Dartmouth was completely stifled by junior starting pitcher Calvin Copping. Copping pitched all nine innings, walked two batters, giving up one earned run, with a 2.62 ERA and dicing out 11 K’s.

The Matadors were in trouble in the top of the seventh inning when bases were loaded with only one out for Dartmouth. The seventh was the only inning Dartmouth scored, but it could have been worse and Moore liked what he saw defensively from his team in that inning and on the day.

“I think it all started with the defense. We do a nice job of taking what they give us, we take the out, and then playing catch when we need to play catch on the double plays.” said Moore.

Copping (4-1) received the win for the Matadors and Dartmouth starting pitcher sophomore Mike Concato (0-2) picked up the loss, throwing seven innings, giving up seven hits and two earned runs with a 4.15 ERA.

There were 20 combined hits for the day between the two teams, but CSUN was able to take advantage of their chances.

CSUN continues their three day series against Dartmouth in Friday’s double header at Matador Field. The games will be at 11 a.m. and 2 p.m.