Baseball: Four-game series ends with the 7-1 Matador victory and sweep of Dartmouth 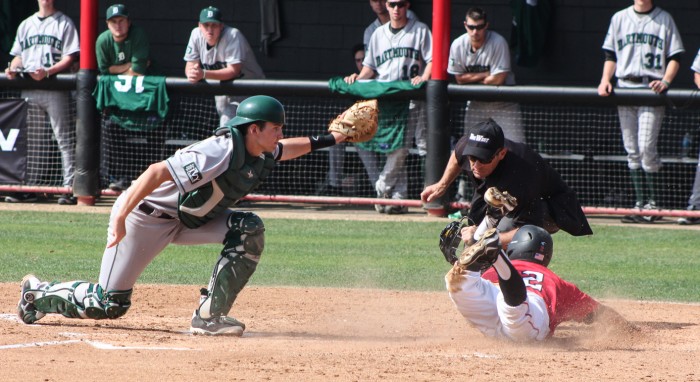 Ryan Raslowsky slides in to home plate after advancing to the third on a wild pitch at the bottom of the 3rd inning. Halie Cook/Contributor

With the win, the Matadors extended their winning streak to a season-high six games and they picked up their eighth win in nine games.

After scoring single runs in the first four innings, CSUN scored two in the fifth and one more in the seventh to cruise past Dartmouth.

Just like the previous game, CSUN was able to capitalize on Big Green miscues in the first and second innings to score single runs in each frame. Senior second basemen Ryan Raslowsky hit a sacrifice fly in the first and freshman first baseman Albee Weiss scored on a wild pitch in the second to give his team a 2-0 lead.

The Matadors then scored two more runs in the fifth, thanks to a two out two-run single by freshman left fielder Elias Orona to bring home Bumstead and senior catcher Nick Murphy.

Murphy, Pak and Orona each recorded two hits, while Bumstead finished the game 3-for-4 with two runs scored.

Freshman starting pitcher Andrew Weston picked up his first win of the season, pitching seven shutout innings, on five hits and one walk. He struck out six batters.

Senior Brandon Warner and freshman Ray Lambert were the relief pitchers who threw the final two innings to close out the ball game.

The Matadors tallied 25 hits and outscored Dartmouth 25-6 over the four-game series.

CSUN will resume its home schedule against California State University, Bakersfield at 2 p.m. on Tuesday, March 24.