Theatre CSUN’s “The Drowsy Chaperone” shines at the VPAC 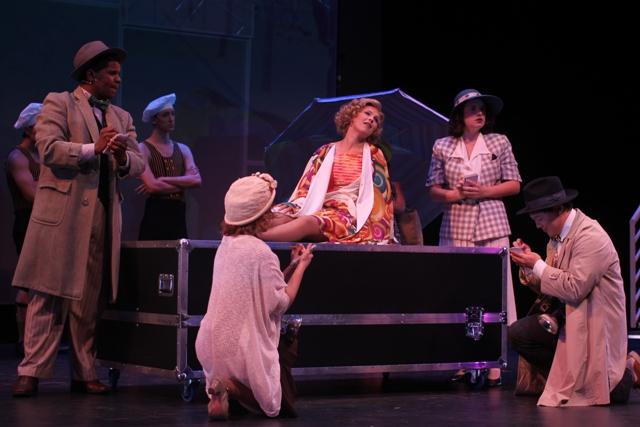 There’s nothing like watching a musical – talented performers, beautiful costumes and catchy choruses virtually whisk the audience away from their day to day lives for a time, returning them to reality with a happy afterglow and humming the show-stopping chorus.

CSUN’s production of Tony Award-winning “The Drowsy Chaperone” had all those elements of a successful Broadway musical, as well as the partnership of the Music Department and the luxury of presenting it to audiences in the Valley Performing Arts Center.

“Drowsy” was written as a spoof of 1920- style musicals and given as a bachelor gift by a group of actors in Toronto. The cast even features characters named for the real life bride and groom – Robert Martin and Janet Van De Graff.

Freshman Daniel Bellusci plays the Man in Chair, a narrator who breaks the fourth wall and makes the audience part of the show.

Bellusci’s opening monologue sets the tone for the musical. It begins in the darkened theater and continues for a few minutes in the dark, until finally Bellusci says, “And you thought to yourself, ‘My God, when are they going to bring up the lights?”

This easy rapport between Bellusci and the audience continues as the “musical within a play” unfolds around his character sitting alone in his apartment. The earnest excitement in Bellusci’s performance adds an authenticity to the show and provided depth amidst all of the slapstick.

“The Drowsy Chaperone” tells the story of a couple’s wedding day, and, as is typical of a 1920s comedy, identities are mistaken, gangsters are involved and general chaos and hijinks ensue.

Janet, the bride, played by Skye Privat, is a starlet giving up her career for marriage to Robert (Steven Brogan.) The bride declares that she doesn’t want to “show off” any more for her fans, but her actions speak louder in the five costume changes she makes in that song alone.

Janet’s agent, Feldzieg (Shad Willingham) attempts to stop the wedding by convincing ladies’ man Aldolpho (Nick Bruno) that he should sleep with the bride, but Aldolpho ends up mistakenly wooing The Drowsy Chaperone (Brooke VanGrinsven) instead.

Bruno’s performance as Aldolpho is charming and silly, especially when he says, “Whaaaaaaaat?” in disbelief that he has seduced the wrong woman.

Willingham has a perfect counterpart in the ditzy showgirl Kitty (Amanda Godepski.) Determined to steal the spotlight, Godepski’s Kitty knows that she’s the right girl for the job, if only Janet would just get out of the picture.

Kitty’s scheme is also foiled by a couple of gangsters disguised as pastry chefs (John Bernos and Matthew Kesner.)

“We cross our hearts we’re pastry chefs,” they vow in thick New Jersey accents. Bernos and Kesner’s food pun banter kept the audience giggling every time they were on stage.

“The Drowsy Chaperone” was director Kari Hayter’s first production as a tenure track faculty member and on opening night, all of the challenges involved in bringing this show to the VPAC disappeared.

And that’s what a musical is supposed to – take us to a place of fantasy and escape. “The Drowsy Chaperone” did just that, and left us humming along afterward.