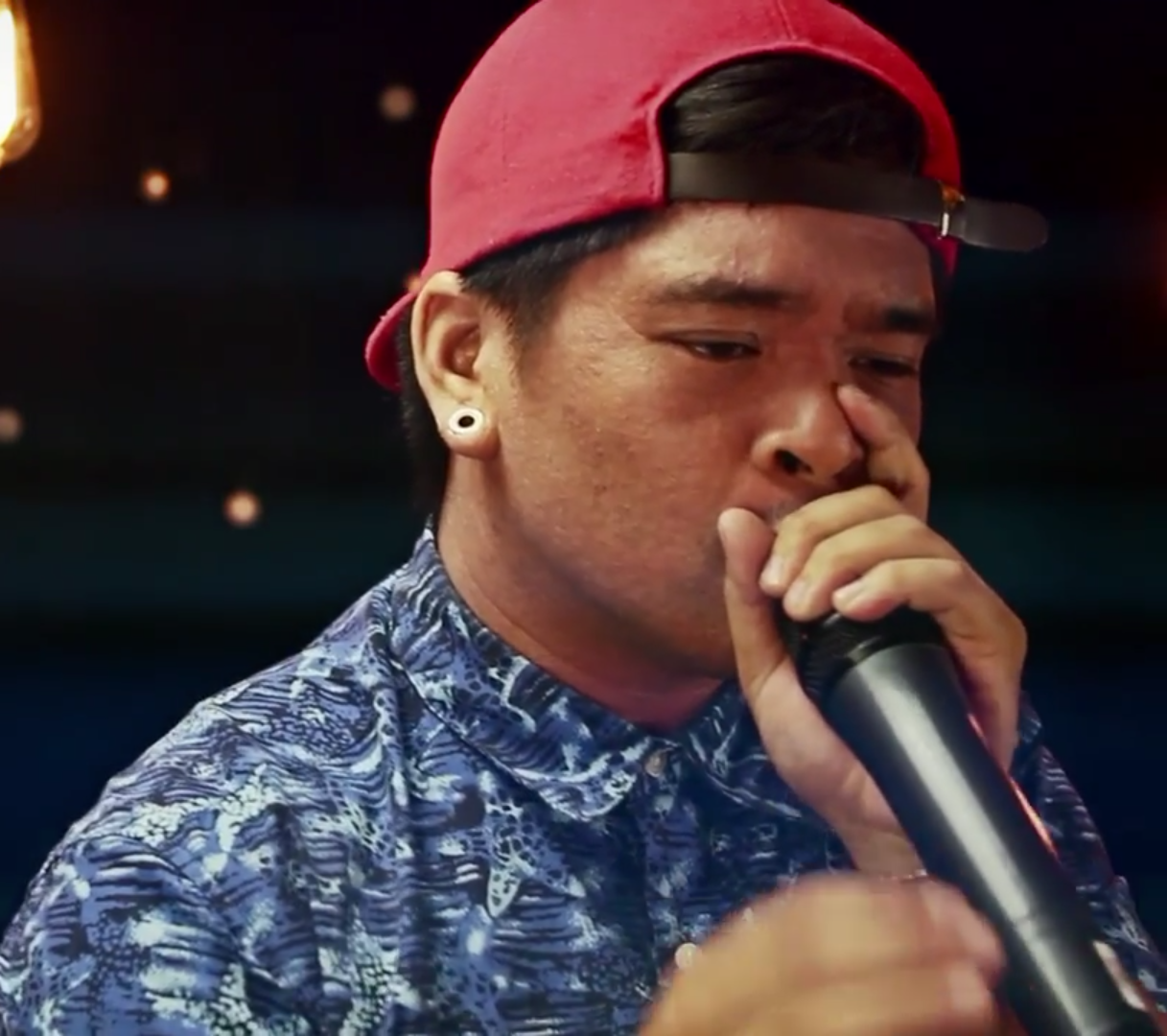 Silence fills the room as the vibrations of vocal chords imitating electronic sounds, drum beats and turntable effects swarm the ears of the intent crowd. No instruments are present, and no one assists to help fill in the noise. There is only a mic, a spotlight and EVMB on stage.

Twenty-seven-year-old Edward-Vincent Montemayor Bantasan or EVMB, is a beatboxing champion, and travels around Los Angeles sharing his talent with others.

Bantasan started beatboxing when he was 13 years old, after hearing his cousin beatbox for the first time.

“I had a cousin that was very musically inclined, and this was back in 2001, and he picked me up from school one day and he started imitating all these drum sounds,” Bantasan said. “I thought that was pretty cool. I asked him to teach me a few things and he taught me the basics of beatboxing and from there I just kind of took it and started going with it.”

Beatboxing is a form of vocal percussion that involves heavily training the muscles in the throat. Similar to working out a core muscle group elsewhere in the body, learning to produce new sounds takes practice.

To help train his voice, Bantasan beatboxes during his morning run four days a week.

“I have to time the beat with my steps and keep a rhythm while running,” he said. “It’s hard because you’re capturing air and breathing out air at the same time.”

When coming up with sounds and beats for his next performance, he tries to imitate anything that he listens to on a daily basis.

“I can pull it from nature, from the ambient sound of when I am walking around and I hear something crazy, I’ll try and replicate it or I’ll record it and then I’ll go back and listen to it again,”he said. “I have a pretty good arsenal of sounds within me. Right now, I do a lot of EDM, but I am kind of trying to break away from that and come up with new sound off of everything I have already.”

Bantasan also brings in sounds influenced by alternative rock, ’70s and ’90s beats, and funk. When first practicing his craft, Bantasan used beatboxer Rahzel Brown for inspiration. He imitated his sounds and used his style as a platform to get him started with the basics of beatboxing.

After years of practice and perfecting his own style, he has performed in various venues including The Roxy, Viper Room, The Whiskey, Key Club, and multiple colleges and high schools throughout Los Angeles.

Bantasan uses California State University Northridge’s event, Espressions, as a way to practice and introduce people to new sounds he comes up with.

“I think he is incredible,” Strum said. “He can replicate almost any kind of music imaginable. It’s difficult to describe his level of talent in words.”

Strum is not the only one who finds his talent remarkable. From 2007 to 2013, Bantasan competed in beatbox battles where his talents were rewarded.

He won second place in the 2007 San Fernando Valley Beatbox Battle in Sylmar. In 2009 and 2010, he won the Irvine Beatbox Championship. In 2010 and 2011, he won the Lancaster Beatbox battle. He has also competed in Los Angeles national beatbox battles six times, and was placed in the top 16 in 2012 and 2013. He has also been rewarded at Northridge talent shows for his skills.

In addition to his beatbox battle career, he has also opened up for Snoop Dogg, Childish Gambino, Pentatonix, KRS-One and Sublime.

Although his skills are bewildering and he has gained recognition of his talent through multiple awards, Bantasan still gets anxious to perform on stage.

“Beforehand, I am always nervous,” he said. “I feel like if you lose feeling nervous, you kind of just lost it already. Like this is just another day in the office and you’re just doing it just to do it.”

Before becoming accustomed to the stage, Bantasan was weary of being in front of large crowds. Although he still feels nervous before shows, beatboxing has helped him open up.

“I used to not like talking in front of crowds,” Bantasan said. “I would start sweating or my forehead would start twitching. After my first performance I realized that it’s not too bad. It allowed me to really just open up to people and really be able to talk in front of people. Now, talking is nothing to me. I can approach people and perform in front of thousands.”

Performing in front of large crowds has allowed him to feel a sense of empowerment in knowing his musical abilities can get a group of people pumped.

“It gives a high being on stage,” he said. “Once I get going it feels good that people are watching and getting into it. I’m controlling the crowd with just my voice and I feel like that’s very God-given. It feels really awesome just to know the talent I have can make people happy.”

Although his talents are recognized and his skills continue to advance, Bantasan plans to only continue his beatboxing career for a few more years.

“I told myself that I want to do this until I am 31, unless something big happens,” he said. “I feel like 31 should be a new page for me if I don’t make it.”

When Bantasan was attending school at College of the Canyons and National University, he graduated with a degree in nursing while still trying to pursue a career in beatboxing.

After working as a nurse for two years, he quit to focus on his career as a beatboxer.

“I like to focus just on one thing only and I was juggling nursing and beat boxing at the same time so it was kind of hard for me to choose which one I really wanted to do,” he said. “To take beat boxing as a different career path was something I wanted to challenge myself with.”

When Bantasan turns 31 years old, he plans to continue his nursing career and still intends on performing every once in a while.

His cousin, Von Bondoc, 27, has watched him grow throughout his beatboxing career, and is delighted of the work he has done.

“I am very proud of what Vincent has accomplished,” Bondoc said. “His accolades speak for themselves. Vince is dedicated to his craft and his hard work has paid off.”

Bondoc is not the only one close to Bantasan to appreciate his talent. Bantasan’s best friend of 14 years, Mark Lopez, 29, also spoke of his abilities.

“His accomplishments are amazing,” Lopez said. “You’re talking about being an opening act to one of Snoop Dogg’s shows, one of the top beat boxers in the nation based off of competitions, and being the background beat for some commercials and video games. Not many people can say they have achieved that much.”

Although retirement is approaching, he still plans on doing as much as he can within the next few years as a beatboxer.

Before turning 31, he plans to audition for America’s Got Talent for the fourth time.

In 2012, he was recruited at Skinny’s Bar in North Hollywood by one of the casting agents of the show, but didn’t make the final cut of the audition process. He has auditioned three years in a row but has not yet made it through. Bantasan’s ambition is high and he was not discouraged by the initial rejection as he plans to continue pursuing a spot on the show.

Although he started without being able to control his sounds, he stuck to it and practiced everyday, perfecting each sound and having patience with himself to be able to master his talents. He expressed his words of advice to all upcoming beatboxers.

“My word of advice is to commit to your craft,” he said. “You have something special that only a handful of people can get good at. Don’t get discouraged in the beginning at all. There’s always going to be someone better than you and just look up to them. Soon you’ll have your own style and also be original.”