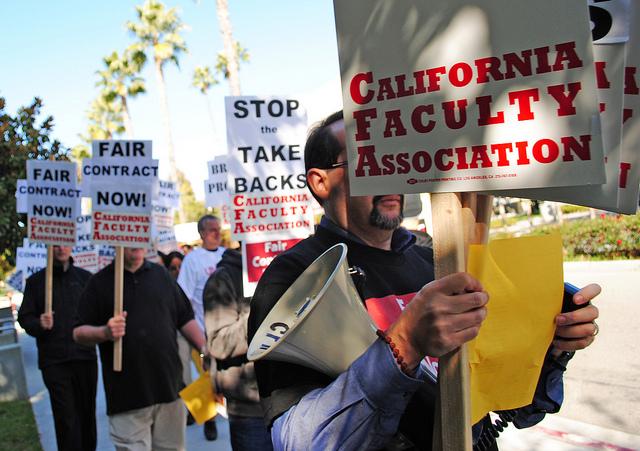 LONG BEACH (CNS) – Over the past decade, the California State University
system increased its spending on managers and supervisors by 48 percent,
while spending on teachers grew by just 25 percent, according to a report
released today by the faculty union.
But CSU officials insisted the system has been pumping money into
faculty salaries thanks to increased funding from the state.
“The CSU values its faculty and is committed to investing in faculty
compensation,” according to a statement from the CSU. “Our dedicated faculty
deserve it and our mission of serving students requires it.”
According to the report released by the California Faculty Association,
average salaries for managers and supervisors increased by 24 percent over the
past decade, while salaries for faculty jumped by 10 percent. The average
annual salary for a manager/supervisor was $106,149 in 2014, while the average
full-time faculty salary was $64,479.
“Over the past 10 years, CSU managers, supervisors and executives
consistently and vigorously prioritized their own needs and preferences over
those  of students and faculty,”according to Lillian Taiz, president of the
CFA. “The CSU system has focused salaries, numbers of positions and spending
on those at the top while not prioritizing the faculty who fulfill the CSU’s
mission to teach students.
“We must shift the balance of priorities away from the 1 percent —
managers and executives — and back to spending that directly serves students’
education and success,” she said.
CSU officials said they have put a priority on employee compensation
since state funding for the system has increased.
“For the last two years, more than $129.6 million has been invested in
employee compensation increases — more than half going to faculty — with
another $65.5 million slated for 2015-16,” according to CSU. “The CSU stands
with the California Faculty Association in advocating for additional resources
from the governor and Legislature.”