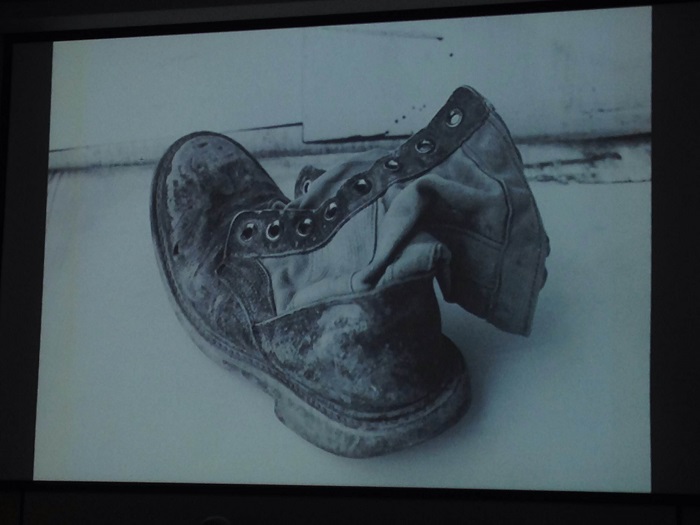 Walter Iraheta showed viewers some photographs from his collection called "Cemetery of Shoes" during his presentation at CSUN on March 25. Photo credit: Betsy Belle Camacho

Walter Iraheta, a renowned El Salvadorian artist, visited CSUN on Tuesday to show the hardships immigrants face through photographs. With his Encontrados (Found in Spanish) photography collection soon to be displayed in the art department’s West Gallery, the Spanish speaking Iraheta explained his images.

Iraheta, 46, wanted to experiment when it came to doing his next project. He grew up witnessing his country’s poverty and native’s desire to “crossover” to America and live the “American dream”. Being educated in art schools in El Salvador and even in Chicago, Iraheta found a great time to experiment with his drawings and photography.

“I wanted to change traditional styles”, he says. “I wanted to experiment with different styles of drawings and experiment graphically, [with] larger kinds of ideas and colors.”

Iraheta is most known for the powerful photographs he had taken documenting migration and other hardships many Central Americans go through when traveling to a different country.

What caused this spark of interest in the artist to turn to photography was the death of the famous El Salvadorian pastor, Oscar Romero. This pastor had influenced people across Central America during the Communist and Sandinista wars that had plagued these countries for decades.

When Romero died in 1980, all it took was one photograph Iraheta saw of the dense crowd that showed up to the pastor’s funeral outside of a cathedral to change his path from drawings and paintings to photographs.

One thing that seemed to fascinate him were shoes and the story behind them.

Iraheta had found thousands of lost shoes that were left behind or buried in pathways that lead to other Central American countries. It wasn’t the shoes themselves that had a profound impact, but it was the idea of the people that wore them who were in search of a new life.

He calls this particular collection the “Cemetery of Shoes” that depicts thousands of shoes in a collection and detailed photographs of individual shoe collages.

More than 50 people came to see Iraheta’s lecture in the Sequoia Hall as he spoke about his art. Iraheta said he wanted to show the extent people took with these shoes to get achieve their dreams.

“[I was] just interested in him as an artist and if he can further explain his work,” Art major Theresa Knopf said.

Walterio Iraheta’s art will be shown in Sequoia Hall’s West Gallery and will be there from March 24-27.