A perfect circle: a look back at Dirk Nowitzki’s legacy 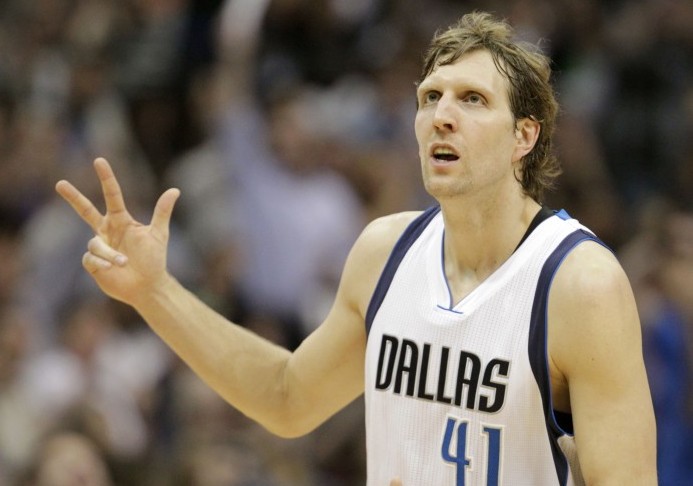 "Nowitzki snatched his 10,000th rebound after a missed corner 3-point attempt by San Antonio’s Manu Ginobili in Tuesday evening’s game at home in the American Airlines Center. The fans were awarded that night with a 101- 94 victory and a little taste of history." Photo courtesy of TNS.

The seven foot power forward welcomed that the moment he decided to spot up behind the arc instead of posting up on the block, something he was criticized for early in his career. However, the 2006 3-point shootout champion silenced the nay-sayers well before people began to lose their credibility as professional sideline talent scouts.

Every year, Nowitzki has improved his game. Going from playing 47 games his rookie year to contributing in all 82 contests the next, he worked at his craft in the off-season. Perfecting that one-leg turn around fade-away jumper was a part of his routine. Being able to solidify himself as a rebounding threat was another.

Nowitzki snatched his 10,000th rebound after a missed corner 3-point attempt by San Antonio’s Manu Ginobili in Tuesday evening’s game at home in the American Airlines Center. The fans were awarded that night with a 101- 94 victory and a little taste of history.

The franchise player added yet NBA all-time category to his resume, each only bearing a few members. Each only bearing names that are recognizable among almost anyone that knows no matter how flamboyant Lebron James dunks the basketball, it’s still only worth two points.

Los Angeles Lakers legend Kareem Abdul-Jabbar is one player who has to share his throne with Nowitzki as being one of only two players in NBA history to record four consecutive 30 point and 15 rebound games during the post season.

In 2001, Nowitzki joined Detroit Pistons’ new wave of bad boy Rasheed Wallace on the list of the being the only two players to make 150 3-pointers while grabbing 100 rebounds in a single season.

That was just to name a few.

Nowitzki joined that list in 2007, the same year he became the first European player to win the NBA Most Valuable Player Award.

The Dallas Mavericks owe a lot of their firsts to Nowitzki. He led them to their first finals appearance in 2006 and their first and only championship in 2011, where he also earned Finals MVP. He is the first Maverick to be selected to an All-NBA team and has done so on 12 different occasions.

Nowitzki’s accolades are endless, ranging from his success with the German national team where he was voted best scorer in German national basketball team history, to being a six-time Euroscar recipient – an annual award given to the best European basketball player.

As the Mavericks’ all-time statistical leader in all but four categories that include regular and post-season, Michael Jordan once said that Nowitzki is one of the few players that could be almost as successful as him in this era.

Though Nowitzki doesn’t need Jordan’s acknowledgement to continue to prove that he is one of NBA’s all-time greatest big men, it is nice to know that Nowitzki accompanies Jordan on the list of 11 players to win a NBA Championship, finals MVP, regular season MVP and be voted an all-star 10 or more times.

His circles are, indeed, exclusive.