No deal with Iran is better than a bad deal 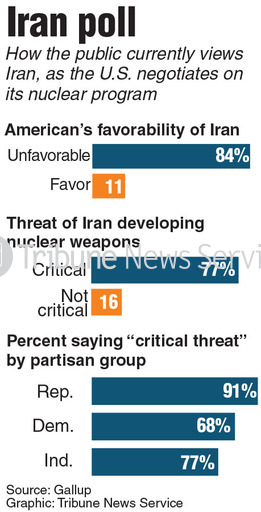 There has been much debate around the fact that the United States has decided to work with Iran.

This new interim deal was signed by six powers in November 2013. There are some who say the deal isn’t going to last, and I agree because everyone wants power, and allies are going to form.

The interim deal made with Iran states that Iran cannot use its nuclear fuel cycle to make atomic weapons. Although the United States, Russia, China, Britain, France and Germany agree that Iran shouldn’t be able to make nuclear weapons, we are setting ourselves up for disaster.

There are others who may disagree and say that having six powers working together will make for a stronger union. Some may believe that a unity among the countries will form and we won’t be power hungry. Having multiple countries getting along well with one another may be better than being at odds, but something is bound to fall between the cracks.

Those who make the weapons can be hiding them in other places to avoid being caught and breaking the deal. If the deal is to fall apart, who is to say that Iran won’t have weapons prepared for retaliation? The U.S. may think they have the best interest of everyone involved, but the government needs to consider the lives of its citizens as well.

Not only should the government be weary of weapons being made in secret, but also of the fact that the other five powers involved in this deal want power. Every country wants to be the best of the best. All countries want to believe they have the best military and government. We may be in agreement with Iran and the other powers, but there have been times when these countries have tried to overthrow each other. If a disagreement of some sort is to occur, one of the five powers can retaliate.

Seeing that the United States is a superpower, there are other countries who detest us. Some want the power that we have and will do almost anything to get it. Even though we have a strong government, we do not need to bring unnecessary war into our country. Agreeing to this deal means that anything can happen. If something bad were to happen, a war will most certainly break out.

Besides the possibility of countries seeking power, allies may form. If there is a fallout with any of the powers involved, they may decide to team up and attack another country. This could lead to the dividing of the powers. Similar to that of each individual country seeking its own power, war can break out between multiple countries. This will only cause more strife between the countries and won’t improve relationships. This could lead to War World III.

The U.S. is making use of the saying “keep your friends close and your enemies closer,” but I don’t think that will work with Iran. There is no knowing if these plans will backfire.

The United States needs to protect its citizens from any outside forces that can wreak havoc.