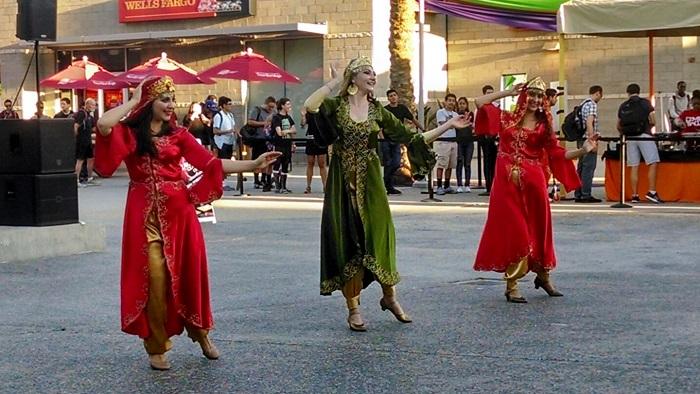 CSUN matadors came together to celebrate a day of diversity and culture at Carnaval in the Plaza del Sol on Thursday.

Live performances, free food from around the world, arts and crafts, and other cultural activities were among the featured attractions.

A 22-year-old child development major, Melanie Moreno, attended the event and said it was a good way to combine cultures into one place.

“I think it’s cool,” Moreno said. “I really like that you get to learn about all different cultures.”

The center of the event was focused on various dance styles and performances including the music and culture of Bali, Egyptian dance, Afro-Caribbean dance, Brazilian Samba, Hindi film dance, Taiko drums, a Chinese lion dance, Native American dance and music, Persian and Armenian dance, and a Polynesian fire dance. Many of the performers danced two numbers and then engaged the audience to come dance with them in their final pieces.

Each booth and event featured a unique activity from different continents as an attempt to give students a taste of cultures around the world without having to leave campus.

Thousands of students passed through the USU and stopped to watch the colorful performances, indulge in the ethnic food offered, and participate in the diverse activities.

Given the amount of space the USU utilized to bring in a variety of cultures from around the world, they managed to pack in a good amount for students to experience.

“I thought it was really well-organized given the amount of space they had available,” Khanal said. “They did a good job and included a lot.”

As the event came to a close, many students continued gathering around and socializing as they experienced the diversity together.

Alvin Hernandez, a 25-year-old Kinesiology major, said he thought Carnaval was a good way to bring people of different backgrounds together and celebrate the diversity, even as it exists on campus.

“It was a great way to get different races at CSUN to come together and socialize,” Alvin said.

After an eight-hour event of showcasing a world of diversity, CSUN students left with a better understanding of various cultures around the world.