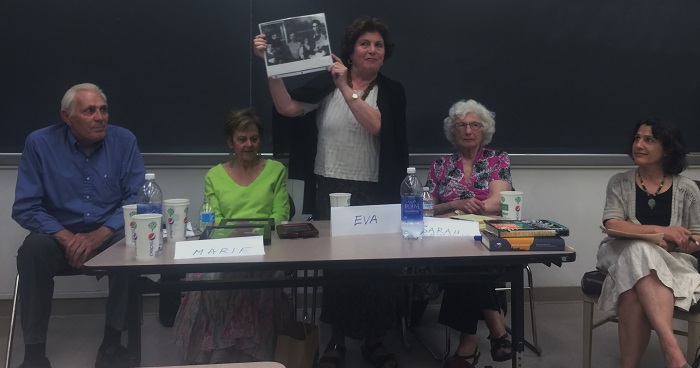 [Editor’s Note: An earlier version of this story contained elements from three different articles about the survivors from the Jewish Journal. The author improperly used details from each article for clarification and failed to attribute them correctly. The issue has been addressed with the author and the editorial staff, and the author has rewritten the article with the guidance of the editorial staff.]

During the Holocaust period, the Germans killed 1.5 million children. The Jewish Studies department invited three survivors of the Holocaust to tell their stories at Sierra Hall room 206 on March 26.

Marie Kaufman, 74, was born in a southern village in France called Milhars, where she experienced her dark days during her childhood. When she was 2-years-old, her father worked at a factory, and the Nazis came to search him, he hid in the back. Although he didn’t ask any help to his boss, who was in the front when the Nazis came, his boss protected him to tell the Nazis that Kaufman went to somewhere else. After that, their neighbor provided a secret place to her father. And her father hid in the cellar for two and a half years.

“The rats were running around [in the cellar],” said Kaufman. “And there is no escaping: my father had to wait for my mother to send food [to him].

Kaufman described that her mother had to send food to her father every midnight, and there were many German watchmen, so she was scared every second on the way to send supplies to her husband.

Kaufman kept her unusual experience for many years and being positive for all these years.

“Now I have four grandchildren,” she said with a smile.

Peter Daniels, 79, was raised by his single mother. His father went to Shanghai, China with his family before Daniels was even born. When his mother went to work during the day, she asked Peter to stay at their home and locked him in.

“I was not allowed to go to any place,” Daniels said. “I had no friends, and could not go outdoors, mostly I just spent my days staring out the window.”

In 1943 he was sent to concentration camp, and stayed there over three years. He remembered that out of 100 people in the camp, only 35 survived.

“It was just unbelievable,” Daniels said.

Eva Brettler, 79, said she was visiting her grandparents in Hungary in 1944 when the German soldiers took her grandmother and aunt as she hid. When she emerged, she sought out the town rabbi, who reconnected her to her parents.

“My father came back home and told us he got fired because he was Jewish,” said Brettler.

When her father was made to do forced labor, her mother tried to protect Brettler. At one point, her mother took on a false identity as a non-Jew, for which she was later denounced and mother and child were arrested.

Brettler’s mother was killed, and the young girl tried to understand why her mother didn’t come for her. Eventually, with the help of a fellow prisoner, she arrived at another concentration camp, where she was encouraged and protected by women prisoners.

“Just never give up hope and keep praying,” said Brettler.

The lecture ended with questions. Guests interacted with students and answered more questions about themselves.

“I think it’s very important for students from the community to hear from Holocaust survivors while they are still alive,” said Beth Cohen, professor of Jewish Studies. “It is very different to hear their stories depending on where they lived, how old they were, and their gender. All these factors add to their experiences. Their individual experiences are very unique.”

The lecture concluded with applause. Most students stayed to ask more questions and took pictures with the three survivors.

Alexandra Ochoa, junior student major in Psychology, believes that these survivors’ stories hold lessons that can be relevant today.

“Even though it was a long time ago, it could still be so relatable today,” Ochoa said. “How they lost their parents and have to be able to be strong for themselves- we can just turn it over to relate to ourselves, and we don’t have it as hard as they did. We don’t have it as tough as they had. We have to be grateful for everyday we have.”