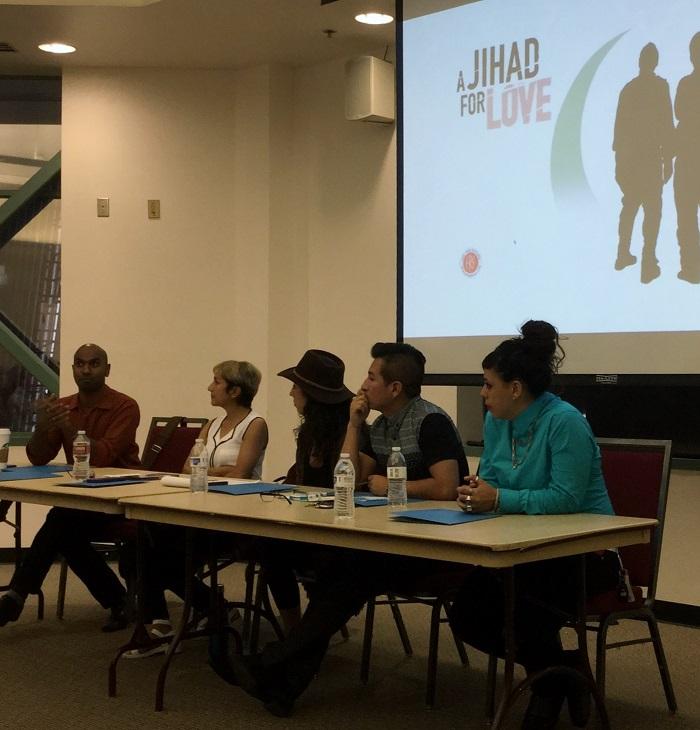 The five panelists from left, Rajah Gopal Bhattar, Ani Zonneveld, Sofia Smith, Ronnie Veilz, and Gina Ali discussed their struggles and stories of the balance between sexual identities and spirituality at the Intersection of Queerness and Spirituality meeting on March 26. (Saffana Hijaz/Sundial Reporter)

The Lesbian, Gay, Transgender, Bisexual, Queer, Ally (LGTBQA) on-campus organization hosted a film screening, panel and Q&A session about finding a balance between one’s spirituality and sexuality, and the struggles they’ve encountered with that.

Every panelist represented the minorities of the LGTBQA community, such as people of color.

“There is a way to intersect queerness and spirituality without having to divide yourself in two,” said Ali. “That your relationship with both of your identities can be combined together without feeling like one is not accepting of the other.”

The three hour meeting started off with the panel of four queer, spiritual individuals with strong representations of their individual identities, and one straight Muslim as a supporter for struggling queers.

Bhattar started off the panel introducing himself as an Indian man of Hindu Vaishnavite background. He spoke of the struggles he endured with gender stereotypes, such as his love for dance being claimed as something only girls did by his father, said Bhattar.

Zonneveld, a Malaysian Muslim woman, told her story of her uncle and all she knew of him was that he identified as queer, but was not allowed to affiliate herself with him. Although this occurred, she did not stray from her personal beliefs as a straight woman and conducts religious Islamic same-sex marriages today, while striving to help queer Muslims find a voice.

Ali followed with her experience of struggling with her identity in trying to be a pious Muslim and shunning her queerness. She wore the hijab, traditional headscarf and even got engaged at one point to try and make herself believe she did not have this attraction toward the same sex.

This did not work and when she came out about a year ago her distance from the Muslim community grew. However, Ali said this did not squander her faith and she is working on bettering her faith.

“When I first came out I almost resented the fact that I was Muslim,” said Ali. “I hated everything about being Muslim because I thought to myself, there’s no way that a community that once accepted me for who I was, would accept me for who I am right now.”

Following a standing ovation for Ali, Veilz got up and spoke of his battles. He talked about his issues with his family, his curiosity at a young age of many things and the issues with his Catholic faith while identifying as queer.

“In Peru we were educated on two things mostly,” said Veilz. “Math and religion. So you don’t get to question other things.”

Veilz said he didn’t know of many iconic, historical figures in America, such as Martin Luther King Jr. or Cesar Chavez, but he knew how to pray.

Veilz’s emotional, political views of the queer community and the hardships they endure grasped the audience, causing them to laugh, cheer, and snap in appreciation of his words.

Upcoming events for the organization include the Day of Silence/Talent Show on April 16 in the Northridge center from 5:00 p.m. to 10:00 p.m. Another event is the Queer Prom, on April 24 in West Hollywood at Candela Lounge at 7:00 p.m.

The Day of silence is to commemorate those in the LGBTQA community who lost their lives, silence will break at 5:00 p.m.

Queer Prom is open to everyone and tickets are $20 per person or $30 a couple.