AS candidates debate for upcoming elections 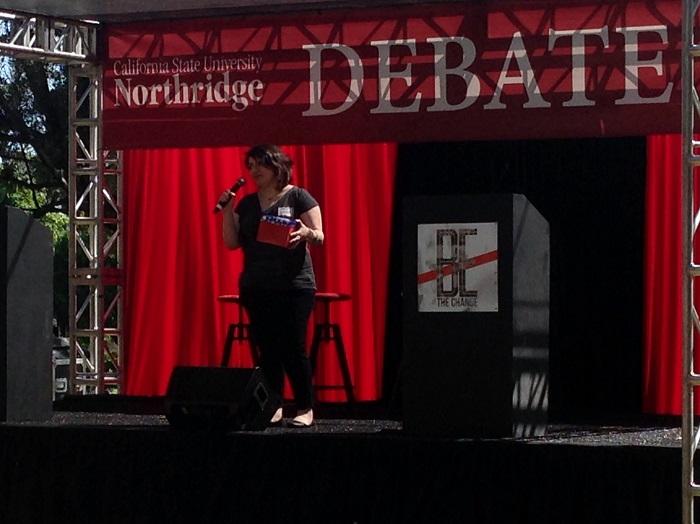 The Associated Student candidates and current AS members gathered at Bayramian lawn for debates to represent themselves one last time to the students before elections take place next week on April 1-2.

The debate began with both vice president candidates, Sevag Alexanian and Vlad Arutyunov, as they discussed the issues of parking, impaction, going green, and their plans to conquer them.

“The students really had a chance to see what each side offers,” said Alexanian. “I hope this year we can break records with the amount of students that go out to vote, whether its for me, whether it’s for Lucas, because it’s important to have the students involved in the elections.”

Alexanian backed up his concern of the low voting numbers by saying only 12 percent of the student body voted last year. He said that he’d like to see the numbers go up so that the students are involved and have the best representation of how the student funds are spent, whose going to be in charge and how their campus experience is going to be affected.

The running candidates are hoping to achieve their four pillars which include communication, opportunity, campus experiences, and sustainability. Running candidates for AS President, Jorge Reyes and Lucas Fehring answered some questions on the current election.

Q: Why are you running?

Fehring: “I’m running because I’ve spent a year trying to fix problems on campus related to sustainability and related to infrastructure, such as parking and water conservation.”

Q: What do you hope to achieve?

F: “I want to fix parking by implementing a program that I spent four months working on with the institute of sustainability and a graduate student named Chelsea Turner. Which would adjust the parking problem by heavily incentivizing carpooling and using software that other universities such as UCLA, CSU Pamona, UCSB and Stanford [are using]”

R: “I hope to achieve many things. The first one, making sure that the first 100 days of my term, if elected, I’d go to 100 classes alongside my board, making sure that we go out there and say ‘hey we’re your elected officials, what do you need from us now?’ So we can prioritize our issues with your issues and make sure that we are a collaboration of ideas for the next upcoming term. The second thing is creating an AB540 Center [the Dreamers Center, where undocumented students at CSUN can go, much like the Pride Center and the Veteran’s Resource Center]. Making sure there are undocumented students being catered for.”

Q: What have you taken away from the debate and the election?

F: “What I’ve taken away is that I realize that the opposing slate and I have very different beliefs. And there’s not a lot of common ground of what we seek to accomplish, but that they have good intentions and they’re good people. So I’m not politically malicious in any sort of way. I’m just determined more than ever to accomplish goals that i’ve spent over a year researching without pay. I’m more determined than ever now making sure that that effort doesn’t go to waste.”

Although the opposing candidates didn’t really find common ground in their ideas for the issues at hand, they agreed in wanting to serve the students.

“They do the debate every year,” said Tray Thompson, senior finance major. “But the closer they can get to the students, the better. Our percentage of students voting is very low, so I think by having more students be available to vote or pushing that out there and advertising it as [AS does] can really make our voice as students be heard for the leadership we intend to lead us throughout our time at CSUN.”

According to the current AS Vice President Talar Alexanian, the debate will be posted on the AS YouTube channel by March 27 for any students that missed it and wanted to see what the candidates have to offer.

“[The new AS members will] need to think about the big picture issues that affect our campus, like instilling a sense of matador spirit, enhancing sustainable practices, CSUN going smoke-free, and the state of our tuition and fees after the end of proposition 30,” said current AS VP Alexanian.

Sevag said voting will be available online and on campus. Information on how to vote will be sent to every student’s CSUN gmail account from the CSU and all students can vote throughout that personalized link on both voting days. Actual voting polls will be placed in front of the Matador bookstore and in front of the Oviatt library from 8:00 a.m. Wednesday to 6 p.m. Thursday. Results will be revealed Thursday night at 8:30 p.m.