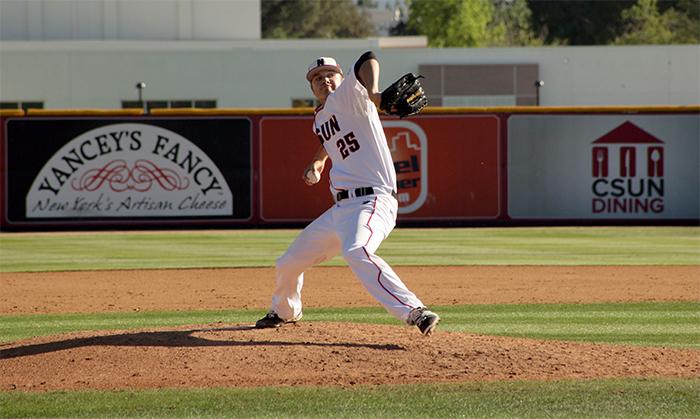 Sophmore Conner O'Neil gave up the lead to Cal State Fullerton after entering the game in relief fgiving him his second loss of the year by a final score of 5-3 in the Big West Conference home opener game, Fri., Mar. 28, at Matadors Field. (Raul Martinez/ The Sundial)

The Matadors were unable to recover from Cal State Fullerton’s five runs in the final three innings and lost their Big West Conference opener 5-3 to the Titans at Matador Field Friday.

Fullerton struggled to get on the board as junior pitcher Calvin Copping only allowed two runs through his six innings at the mound.

“Calvin did a nice job,” head coach Greg Moore said about Copping’s heroics for the day. “He battled just like he did last outting for a long time with certain hitters and certain innings.”

Junior shortstop Yusuke Akitoshi and freshman catcher Albee Weiss kicked it off for the Matadors in the second inning. The freshman helped earn another run in the fourth to make it 2-0. The freshman would pick up his first career three-hit game alongside a personal-best three runs.

“Albee had some good at bats,” said Moore. “In his first at bat he saw a lot of pitches and he put himself in a situation to hit pitches that was repeated later in the game. He did a good job all day of simplifying his approach.”

CSUN kept Fullerton off the board until the seventh inning, where the Titans cut the lead to 2-1 before taking their first lead with an RBI triple from David Olmedo-Barrera.

Runs in the eighth and ninth boosted Fullerton’s lead to three before senior Nick Blaser ran it home to put the Matadors within two in the last inning.

The Matadors kept the Titans scoreless until the top of the seventh. Copping, already over 100 pitches on the game, came back out for the start of the frame and gave up back-to-back doubles that cut the CSUN lead to 2-1.

CSUN will be back at Matador Field Saturday afternoon to continue their three-game series against the Titans.