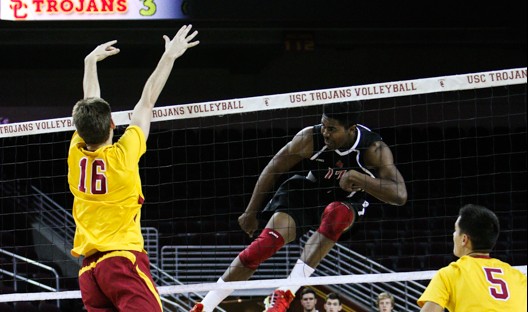 The crowd of 434 was loud, rambunctious and definitely got into the heads of some of the Waves’ players, allowing the Matadors to be victorious in two of the five sets.

Having come off a four-game winning streak, CSUN went into this match ready to win and play hard. They knew the Waves would be a tough opponent, but anything can happen on the court.

“Out there on the court it feels like we’re starting to gel at the right time and it feels good,” said senior setter Travis Magorien. “It feels like no matter what goes on on the other side of the court it doesn’t affect us. If there are bad plays or they make good plays, we’re still positive, and I think it’s just the overall energy of the guys.”

The first set had no lead until the second half. Both the Waves and Matadors volleyed back and forth giving one point, then taking another. Tied at 12, Pepperdine went on a two-point run.

From there, the Waves remained in the lead and never gave it up. The Matadors were never farther than three behind the Waves, but ultimately lost the set. There were a total of 11 tie scores throughout the set and six lead changes. The Waves out hit the Matadors .259 to .139, but the Matadors had 12 kills to their 11.

“The line up has been working,” said senior outside hitter Kyle Stevenson. “Jakub’s been playing great and Brad, Nick and I have been passing well. Everyone in the line up we have right now is serving well.”

Set two started with the Matadors taking an early 5-1 lead. Pepperdine fought the entire set, but the Matadors never gave up the lead, nor did they ever give the Waves an opportunity to tie it. The Matadors out hit the Waves .214 to .080 and had 12 kills to Pepperdine’s nine.

In the third set, the Matadors started out on top, but the Waves soon caught up. It was neck and neck with the two exchanging the lead on each point. At 12-12, CSUN went on a three point run securing their lead. They didn’t give it up from here, nor did they allow the Waves to tie the score. The Matadors far out hit Pepperdine .382 to .192 and fell 11 kills to CSUN’s 17.

“This line up is obviously good for us, we won four out of the last five matches against some really good teams. We could have easily beat this team if a couple of plays went our way,” said Head Coach Jeff Campbell.

The fourth set started out close, but the Waves took an early lead. CSUN was never more than three behind until Pepperdine hit the ball off the court tying it at 18. From here on the two exchanged the lead, point for point until a block from Pepperdine ended the set 23-25. The Waves outhit the Matadors .370 to .242 and had just two more kills (15 to the Matadors’ 13).

Magorien started off the fifth set by missing his serve, putting the Waves ahead. Pepperdine remained ahead until Sending a ball off the court tying it at nine. Just as before, the two were point-for-point, but with a kill, the Waves took the set.

“We had a lot of puzzle pieces on our team and it takes a while to get the right fit. It looks like we found our line up and we’re gonna try and stick with it,” said Stevenson.

The Matadors take on UC Irvine Wednesday, April 1 at 7 p.m. at the Bren Center.