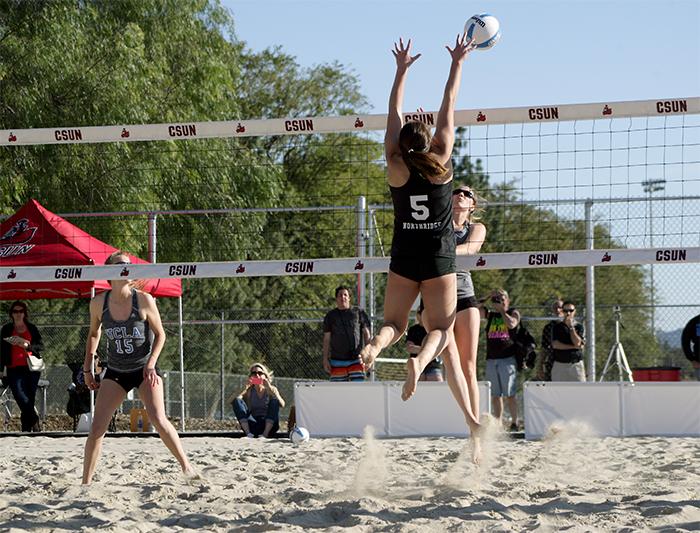 The CSUN Sand Volleyball team would again show their overall progress, keeping sets close against top ranked foes, only to lose two matches out of the three.

The opening match against the 15th ranked Nebraska Cornhuskers on Friday would be highlighted by the lone victory from the duo of Casey Hinger and Kelcie Randazzo. Hinger and Randazzo would battle against Cornhuskers Justine Wong-Orantes and Alicia Ostrander in a close, 21-18, 13-21, 15-10 match.

Nebraska would go on to dominate the match, with CSUN’s Mahina Haina and Katie Sato losing, 21-12, 21-6 to the Cornhusker duo of Kadie Roltzen and Kelly Hunter. The strong Matador pairing of Julie Haake and Nicolette Pinkney would even be over matched, losing to Nebraska’s combo of Amber Rolfzen and Kira Larson, 19-21, 21-16, 12-10.

Nada Dragovic and Alia Casino would go on to lose against Cornhuskers Ceceilia Hall and Annika Albrecht in a close three sets, 19-21, 21-11, 15-9. The CSUN duo of Cieana Stinson and Stephanie Serna would drop its match to Melanie Keil and Kelsey Fien, 20-22, 21-11, 12-1. Lastly, Alexa Ethridge and Fien again would defeat Lauren Conato and Brianna Johnson, 21-14, 21-7.

Opening Saturday, CSUN took on Boise State collecting its first victory of the weekend. Hinger and Randazzo would go on to defeat Broncos Hannah Hubbard and Maddy O’Donnell, 21-17, 11-21, 15-10. The CSUN duo of Haake and Pinkney would sweep Broncos Katelyn Kinghorn and Ally Duffy 21-12, 21-13, dominating the sets and furthering CSUN’s lead.

Following Saturdays first match, CSUN pairings of Hinger and Randazzo, and Dragovic and Casino would both go on to lose against duos from 10th ranked Arizona. Hinger and Randazzo would play Wildcats Madi Kingdon and Kaitlyn Leary close, 21-17, 17-21, 16-14.