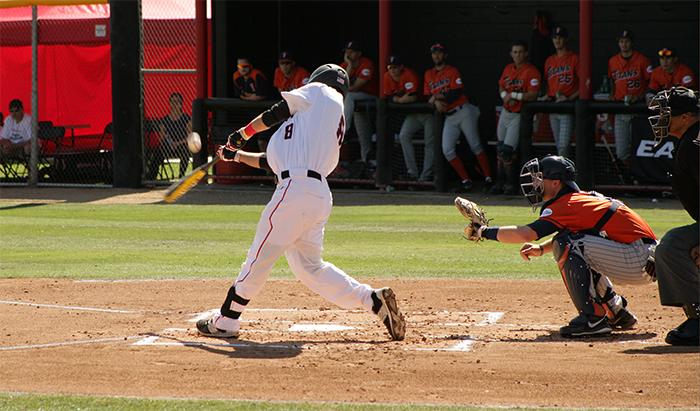 Senior Chester Pak struggles leading off for the Matadors going 0 for 5 in the day with 2 strikeouts in the loss to Cal State Fullerton by a final score of 5-3 in the Big West Conference home opener game, Fri., Mar. 27, at Matadors Field. (Raul Martinez/ The Sundial)

CSUN was defeated 7-2 by Cal State Fullerton as the Matadors could not overcome a slow start against the Titans.

Though Raven had seven strike outs, he relinquished two early scoring runs in the first inning and another solo home run by Fullerton junior David Olmedo-Barrera, in the fifth inning. Gavin, on the other hand, gave up one run, which came in the top of the sixth inning.

“We didn’t stay in positive [pitch] counts, they took advantage of that.” said CSUN head coach Greg Moore. “That was the key to getting their offense going and to their credit, they jumped on some pitches in 2-0, 2-1 counts.”

CSUN scored two runs and had eight hits on the day, but five of the eight hits came from two players.

Freshman Justin Toerner, who had an RBI double, and senior Nick Blaser were the two players who combined for those five hits. They were the only consistent hitters throughout the game’s entirety.

The Matadors tried to rally late with productive at bats, but the damage had already been done.

“I thought our team took some really good at bats in the seven, eight and nine [innings], we just didn’t get anything going.” said Moore.

The game was within reach for the Matadors, but an explosive sixth inning by the Titans was the deciding factor in putting the game out of reach.

The Matadors used four pitchers out of the bullpen today, but the results were not exactly what head coach Greg Moore was looking for.

“Our bullpen wasn’t sharp today, we got into many three ball counts out of 1-2 and 0-2 counts, so we just didn’t finish, but we’ll get better at that.” said Moore.

Starting pitcher Raven (4-2) picked up his second loss of the season and Fullerton’s Gavin (3-1) got his third win.

In the next series of Big West play, CSUN heads to Long Beach to face Long Beach State on Thursday at 6 p.m. for another three game series.