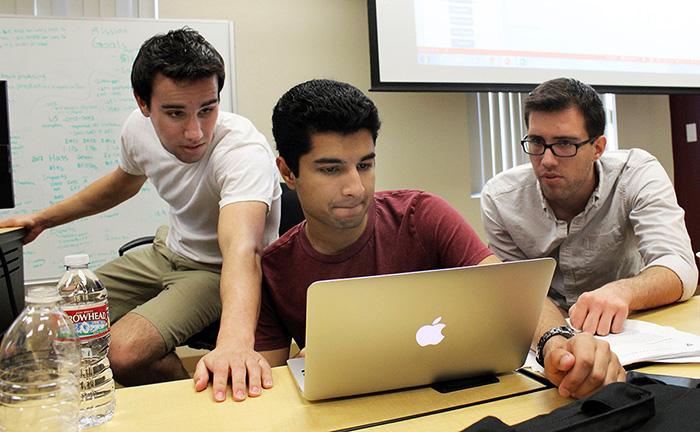 Juniors Alec Ledoux (left), Joveen Grewal and Justin Fleming are 2015 Nazarian College Case Competition finalists. They were one of the three teams that advanced past the preliminary round in which nine teams participated. Wynnona Loredo / Staff Photographer

With a total of $8,000 on the line and countless hours of work invested in their 20-minute presentation, none of the finalists could afford to lose.

The Business Honors Program hosted its 14th annual case competition in which CSUN business students collaborated in two- to four-member teams to win a $4,000 cash prize, which would be split among team members. Another $4,000 could be donated to a Nazarian College organization or department of their choice.

To win, teams analyze a Harvard business case – based on a real company – and showcase their best recommendations to the top-level executive judges in the Oviatt library’s Jack Florence presentation room. This year, finalists had three weeks to solidify ideas for Mission Produce, its avocados and its supply chain possibilities.

This year, the two-round tournament started with nine teams and was cut to the top three for the second stage.

For the second round, Business Honors Program director Barbara Gross partnered with the development office and solicited prominent alumni, friends of the college, advisory board members and donors to judge. One judge was multimillionaire David Nazarian, the donor after whom the business college was named.

After an exclusive networking mixer for tournament participants, doors were opened to the public so they could cheer teams on as the finalists pitch their recommendations in the last leg of the competition.

At about 8:30 p.m., the judges returned from deliberation, the spectators moved back to their seats and the teams awaited to hear their team number called as Barbara Gross announced the winners.