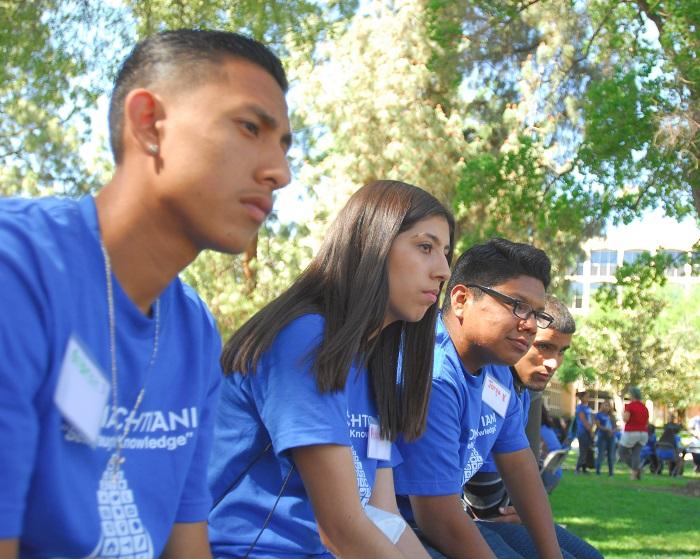 For a time, graduating high school and going to college was the last thing on Kevin Herrera and Bryant Sandoval’s minds.

Herrera, an 11th grader at Maya Angelou High School in South Central Los Angeles saw himself as a bad student. Boxing and mixed martial arts — not to mention a kick in the pants from his mother and father — forced Sandoval to change his outlook on life.

“While I have the chance, I am going to take it,” Sandoval said.
And it was watching his parents’ struggle to put food on the table that forced Sandoval to change his life toward a successful future.

“They personally told me, ‘We don’t want you to be like us; we want you to succeed in life,’” Sandoval recalls his parents telling him. “That changed my whole life. That really made me think twice about what I had.”

After deciding to stay in school, things began falling in place for both teens. They have a supportive network of friends, pursue hobbies they enjoy, and have a better idea of what they want to do with their future.

The classmates were two of over 500 students who attended the 17th annual Raza Youth Conference, hosted by MEChA de CSUN, on March 28. The conference hosted students from high schools all over the Los Angeles area, and as far north as Victorville, and featured a variety of workshops, keynote speakers and presentations.

“We talked about the pros and cons about going to college, and why some people wouldn’t go to college, but mostly about the benefits that you would get,” said Norelia Cedano, a 10th grader at Arleta High School. “Some other information I got was how to apply for scholarships. That was some information that I didn’t know.”

Themed “Momachtiani” — Nahuatl for the idea of self-taught knowledge — the conference was aimed primarily at high school students of color, with a focus to provide students with resources to shape their future beyond high school.

“The purpose to have this conference is to really motivate the youth, students of color, into higher education,” said Edgar Cruz, main organizer of the Raza Youth Conference. “Students are given resources to really get to know what’s out there and start thinking, which relates to our theme.”

Cruz said he would like to see more representation of Latinos in higher education, especially ivy league schools.

Speaking after her keynote address to the conference youth, Carolyn Vera feels the playing field is uneven for Latinos and youth of color who seek to pursue a higher education. In general, she said, higher education for people of color tends to be out of reach when compared to their white counterparts.

“We want access to equity, which means that we want all of our youth to have the resources, the capacities and the ability to be able to apply to college and to be able to go into higher education — if they want to,” Vera said.

Students don’t need a perfect record and a 4.0 grade point average to set foot in a college class, Vera said. And, Vera said, if students choose not to attend college after high school, they should have access to resources that will help them pursue other sources of education.

Coming out of high school, Vera never achieved a 4.0 grade point average, she said, yet she was able to attend college and earn her undergraduate degree from UC Berkeley. Today, she organizes with Los Angeles Immigrant Youth coalition and works at Community Coalition as a parent organizer.

“Higher education is not advertised or promoted as a generative possibility for youth of color in low-income communities, such as the ones that are here today,” Vera said. “So the reason that conferences like MEChA de CSUN’s Raza Youth Conference matter is that they bring students to a university.”

Although still in sixth grade at Fillmore Middle School, Edward Gomez felt Saturday’s conference gave him an idea of what college he wants to attend, even if it’s years away.

“When I’m all grown up, I want to know which college I want to go to,” he said. “I think I might go to see more colleges and know which one is the perfect one for me.”