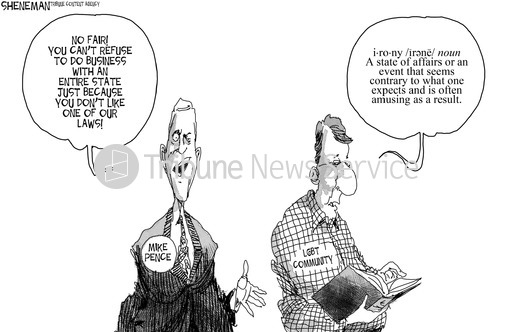 We are a nation divided when it comes to same sex marriages, and now the divide is even more intensified, thanks to Indiana Governor, Mike Pence.

Pence signed a bill known as the Religious Freedom Restoration Act—allowing businesses in Indiana the right to exercise their religious beliefs.

Although, everyone has a right to their own beliefs, setting this law into motion will only cause more discrimination against the LGBTQ community.

The law which is supposed to be passed in early July is absolutely ridiculous. The law promotes discrimination against gays, lesbians, bisexuals and transgender individuals. LGBTQ can be lawfully denied service from any Indiana business.

Aside from the law openly discriminating against LGBTQ— It is also promoting the idea that being who you are will never be enough!

There are some who believe that business should be able to decide who they do and don’t give service to. Some people don’t look at this as discrimination but as a way to stand up to the government. Those in favor of the law believe this is a way for businesses to stand firm in their beliefs. Regardless of what people think, this law is still discriminating against a certain group of people.

Throughout our history we had heroic figures, like Martin Luther King Jr. and Nelson Mandela who fought for equal rights for all people, despite the color of one’s skin. Here we are years later and we are still fighting for human equality. However, I’m happy to say that I live in Southern California—going to school at CSUN, where discrimination of any kind is intolerable.

CSUN is a community that does not discriminate against people based on their sexual preference. Instead, it is a campus that welcomes students with open arms. In fact, the university shows its support of the LGBTQ community by having a Pride Center and hosting events for all who show interest.

Some of the events include Trans Awareness Week, Coffee Nights and Tuesday Talks.

We are a campus that does not shame the LGBTQ community. Instead, we take pride in it.

CSUN understands that the LGBTQ community have it hard enough. So, for Pence to sign the Religious Freedom Restoration Act, was simply immoral.

We live in a heteronormative society already, so for someone to act outside of this “norm” can be very difficult.

More often than not, individuals who identify as lesbian or gay are scared to “come out” to their friends or family and show their true colors because of what others may think. And then they have to face the aftermath— the blank faces, stares and sometimes disappointed looks from people who don’t even know them, or even worse, their own family.

What makes it even more difficult is the fact that some can’t even get married in places that they live, or even now, get service from their favorite diner, clothing store, etc. Instead, they are denied freedoms that are given to the majority of other humans.

LGBTQ are 100% people! They have feelings, wants and dreams that others are putting down, e.g. Governor, Mike Pence.

So, what’s going to be next? Not allowing service to people who have curly hair? If we allow petty laws like this to pass, there might not be any hope for real equality.