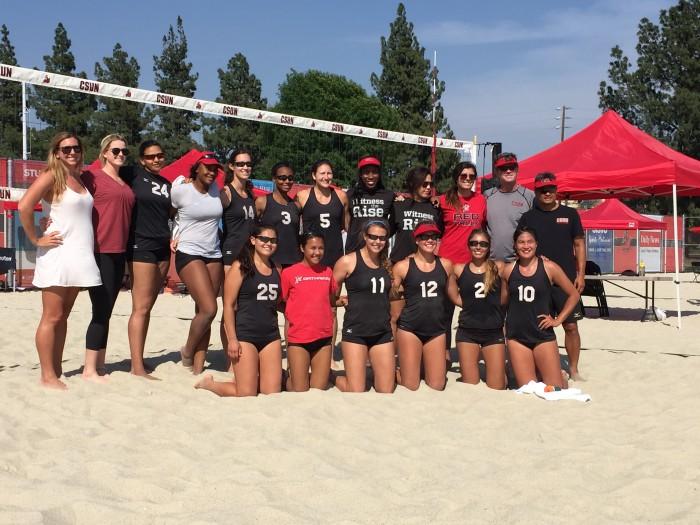 CSUN Sand Volleyball season concludes with a 5-0 loss to the Long Beach State 49ers. The Matadors finished 3-8, with a promising future ahead for the young program.

CSUN would show much progress from the last time they faced the 49ers, even with Long Beach State taking all five matches again.

The CSUN squad now concludes the season at 3-8, which is a great start for the young program.

Head Coach Jeff Stork said following the game, “I think you have to look at the full season, as opposed to one team,” Stork continued, “This team has developed tremendously over the past two and a half months, with this facility that President Harrison and Dr. Martin had the vision of building. The development of our players is what I’m most happy with. It’s going to get better and better in years to come.”

Even with the loss, Assistant Coach Gary Sato saw a lot of growth in the squad, saying, “We had a lot of good plays on a more consistent basis. That was really important for us to do.”

Coach Sato when asked about the experience gained by the players said, “No doubt about it. The experience of just being on these great courts with the wind and sun, is really something that will benefit (the players), and hopefully some will play during summer on the beach,” said Sato.

When asked whom he would name the seasons most valuable player, Sato said, “A lot of individuals stand out… I thought that Alia Casino played consistent the whole year and really helped her team out a lot.”

Alia Casino, a junior, said following the match, “We were a little late recognizing their shots and who to go after,” Casino continued, “They had some shots that we were late reading, but I think both teams hustled pretty hard.”

Casino would elaborate when asked about the transition from in-door to sand volleyball, “It’s really hard. It’s two different games, but after getting enough reps you get the hang of all of it,” Casino finished, “It’s a learning process, you have to be patient and work at it.”

“Last year was our first year, and I’d say we’ve improved so much from our past season, especially with our new coach Gary Sato, he knows the game,” said Casino.

Mahina Haina, a senior, said following the loss, “I don’t think the score reflected how well we played,” Haina continued, “We are just growing in the game. It’s a different game than indoor. We really worked hard on all the things that we have to do for outside, and we just got better at playing beach, even though we didn’t get the outcome we wanted,” said Haina.

When asked the biggest aspect of improvement she has seen from her duo’s play, Haina said, “Probably trust factor and communication. We are trusting, seeing a little better, executing now.” Haina continued, “Before we knew what we had to do, we weren’t really executing it, and now we are executing more than we did before.”

The transition form indoor to outdoor is problematic, but is doable, said Haina, “In indoor you focus on one specific skill, whether its passing, setting or hitting, in beach its all three,” continued Haina, “You have to be everybody at once, so its tougher, going from five other people to one, you have to make up for it.”

Haina continued, “I think it was a really great season. We improved ten fold, completely, in our mental game, physically we are right there with everybody, we’re colligate athletes, but mentally we made jumps and bound from what our team was last year,” finished Haina.

Head Coach Stork concluded, “I use this maybe too much, but again it’s the reality; we’re an indoor team playing sand. If we were a sand team playing sand, we’d get an extra 50-60 days of training.” Stork continued, “We are a little bit behind some of the teams that are exclusively sand, you can see it how they touch the ball, play the game, but our improvements as a team has been tremendous,” said Stork.