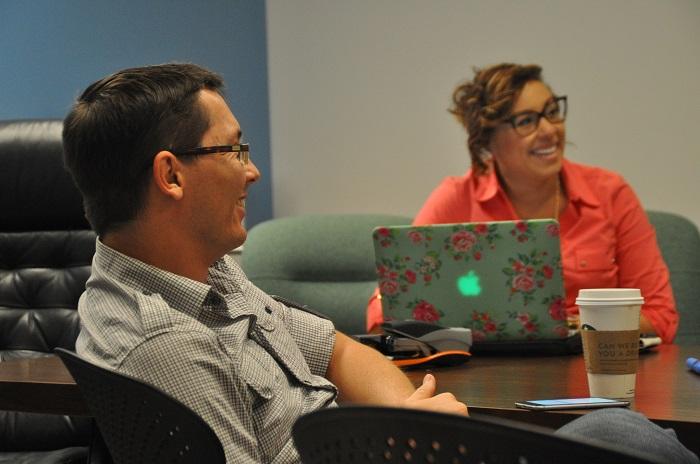 CSUN’s Speech and Debate team are heading to Portland, Oregon on April 2 for nationals.

In their last semester at CSUN, Popham and Slusser will head to nationals as a part of District 1, which is most of California, within the 11 to 12 competing speech categories. Popham will preform an interpretation speech, while Slusser will take on the informative and persuasive.

“If we show up at nationals we’re already at the top five percent in the country,” said the Director of Forensics and assistant professor John Kephart. “It’s just like the NCAA tournament. You can qualify at large when you have really good performance all year or you can qualify for our district tournament, which is kind of like winning the Big West, like the women’s basketball team did.”

In order to qualify for nationals, the competitor will have to place in the finals at least three times in competitions throughout the year in the preliminary round, said Kephart. All competitors must score lower than nine points, so if you get third place three times, that would add up to nine, not qualifying.

However, if a competitor was to get third place twice and then second or first place at least once, that would equal below nine and qualify one for nationals.

Since 2008, CSUN has sent at least two students to nationals every year, said Kephart.

A few years ago Kephart recruited CSUN alumni and four year nationals competitor Brianna Broady as the assistant speech and debate coach of the Matador Speech and Debate team. Broady said she has become one of the main coaches working with Popham and Slusser in the finals stages before nationals, along with speech and debate coaches Jessica Kwak, Ashely Furrel, and Anasheh Gharubigi.

Broady says that she hopes these are things she, Popham and Slusser will take away from nationals and bring back with them. According to Broady, getting to know other schools and networking with other coaches to see their strategies and what their students are working on will help her to grow and better herself as a coach.

Popham has also been nominated for the All-American award for nationals, and is one of the finalists.

“[Speech and debate has] helped me do well in interviews,” said Popham. “It’s not only a great thing to have on a college resume, but also on a job resume. I got an internship at CBS News in New York this summer.”

Both Popham and Slusser said they have gained positive things from their years involved with Speech and Debate, and will give their all at nationals since this is their last semester on the team.

Broady advises that Popham and Slusser “just have fun and put [their] all into each round that [they] do.”

Coming back with trophies doesn’t matter, but that it is more about the experience and what they take away, said Kephart.

Nationals will run from April 2-7, and will be followed by the Speech and Debate team’s annual public showcase in late April or early May, in the Ansdam library on the second floor of Manzanita Hall.