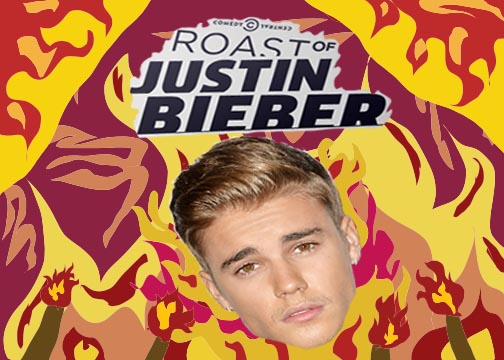 Follow @tommygallegos15
//
Back in 2013, the Comedy Central Roast decided to sway away from its usual drubbing of washed up “has-beens” (Roseanne Barr, Charlie Sheen, David Hasselhoff), to settle for a younger, more pop-culturally relevant target in James Franco.

Now, sticking to that formula, the network is back at it with The Comedy Central Roast of Justin Bieber.

“Beliebers” be warned; this Roast will haunt your nightmares.

The Roast, hosted by Kevin Hart, who’s opening monologue was received with cheers from fellow Roasters and the crowd, would be hilarious and controversial throughout.

After it’s taping, much was made of the exclusion of jokes made by Roasters within the shows final edit. It’s odd to think some jokes about the late Paul Walker and Bieber’s mother, Patte Mallette, were edited out, when repeated references about Bill Cosby’s rape accusations and Jeff Ross’s joke about comedian Pete Davidson’s father dying on 9/11 were still included.

Nonetheless, the Roast would no doubt live up to its hype, producing cringe worthy moments throughout the night.

“Kevin you’re everywhere. You know, Kevin’s actually going to be on the next season of Game of Thrones; he’s playing Peter Dinklage’s own shadow.”

“Justin, you’re so successful, so rich. You’re like our Beatles, not the band the bugs that live in s***.”

Comedian Natasha Leggero was killer in her delivery and brought the crowd to laughter throughout the entirety of her set.

“Kevin I love you as black Annie!”

“Justin, you know, I lost my dad on 9/11 and I always regretted growing up without a dad, until I met your dad Justin. Now I’m glad mine’s dead.”

“Let’s hear it for Shaq! Thanks for being here and taking a break from throwing barrels at Super Mario.”

Don’t know Pete Davidson? Neither did I until the Roast but following his grilling of Bieber and more specifically his fellow Roasters, Davidson no doubt has a new fan in me.

Referencing his firefighter fathers 9/11 death might have also been one of the ultimate “drop the mic” moments in Roast history. The youngest member in Saturday Night Live history at 21, Davidson is just beginning a great career in comedy.

“Hannibal, all night I’ve been trying to remember who you remind me of. And then it hit me, you look just like that gingerbread man I left in the oven to long.”

“You need to settle down, bring some balance into your life. Find yourself the right gal but she’ll have to be someone on your level. Someone powerful, famous, and rich. Someone you can smoke a joint with or indulge in the occasional three-way, I’m talking about a player in the boardroom and a freak in the bedroom. So Justin, my final piece of advice is, call me.”

At first, Stewart was “siri-like” in her delivery of jokes, taking her time and slowly reading off punch line. Even with her slow approach, Stewarts ability to shock her fellow Roasters and the crowd would ultimately make her set stand out more than any other celebrity Roaster, by far.

*Flicking his cigarette at Bieber

To the surprise of viewers and possibly Bieber as well, the closing Roaster would by San Diego’s own, Ron Burgundy. Ferrell as Burgundy was great, especially when he started praising Bieber, “I took my pants down and took a big creamy s*** in the greenroom because I thought to myself, “That’s how the Biebs would do it!”

“Biebs, you’re a smart man with a good heart, and I know you’ll never end up like Kurt Cobain and Amy Winehouse… respected.”

Senior Roaster Jeff Ross would bring fellow Roasters to tears and have the crowd “Ohhhhhh-ing’ and “Awwwwe-ing” for the majority of his set. Always one to push the limits, Ross once again went all in for the roast, referencing Anne Frank, Bieber’s sex life, and dropping many more hair raising punch-lines throughout his set.

“I’m new to comedy but here’s a joke; What do you get when you give a teenager 200 million dollars? A bunch of “has-beens” calling you a lesbian for two hours.”

Bieber’s jokes were well written and his delivery was spot on. His closing statement left an impression on me as well, saying, “There was no preparing me for this life. I was thrown into this at twelve years old, and didn’t know what I was getting into.”

Bieber continued, “There’s moments I’m proud of and others I look back and I’m disappointed in myself for. The things that I’ve done really don’t define who I am.” Bieber finished, “I’m a kind hearted person who loves people and through it all I lost some of my best qualities and for that I’m sorry.”

Is the Roast a career rehabilitating moment for Bieber? Only time will tell, but it’s a good start for the young musician; showing his ability to laugh at himself and owning up to past mistakes.