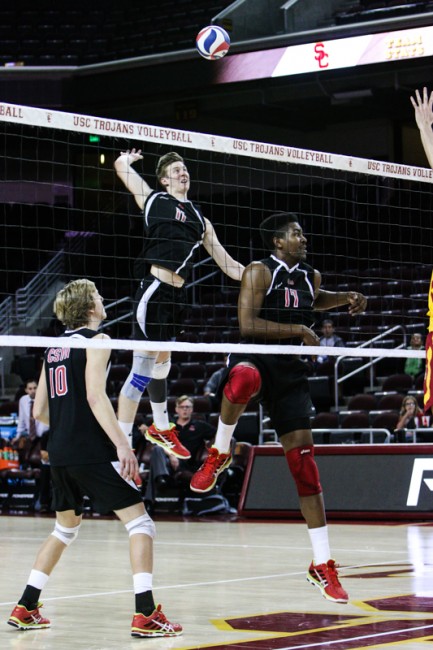 The UC Irvine Anteaters showed no mercy against CSUN, (9-15, 6-12 MPSF) sweeping them three sets to none (25-16, 25-17, 26-24). The Anteaters took the first two matches with ease but the Matadors fought back hard for the the third. Ultimately CSUN was unsuccessful and succumbed to the .378 hitting percentage UC Irvine used to dominate the court.

In the first and second sets, the Matadors and Anteaters battled evenly until half way through the set. Large runs from the Anteaters in both sets set them ahead and allowed them to become victorious. Both sets ended in service errors from the Matadors, the first from junior outside hitter Sam Holt and the second from senior middle back Greg Faulkner.

After shortening a significant Anteater lead, the Matadors tied the third set at 16 and were then able to gain several one point leads as the two volleyed the lead back and forth. At 24-23, CSUN on top, the Anteaters went on a three point run: an Anteater kill, CSUN attack error and a final UCI block to win the set.

The next stop on the road trip for the Matadors is in La Jolla at 7 p.m. against UC San Diego.