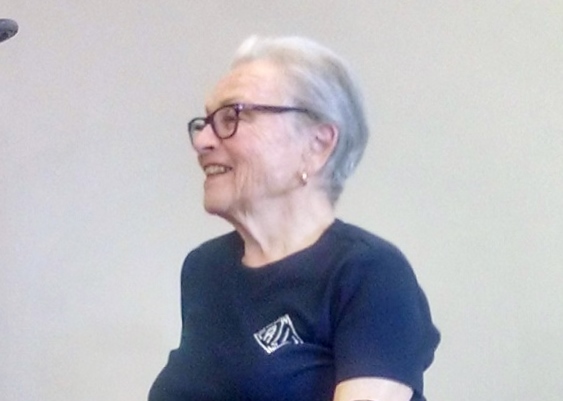 Erika Jacoby speaks to Elaine Goodfriend's Jewish Studies class on Wednesday, April 1 about her experience before, during, and after the Holocaust. Photo credit: Jamie Perez

The Jewish Studies Interdisciplinary Program welcomed Holocaust survivor Erika Jacoby to speak to students about her experience before, during, and after the Holocaust on Wednesday.

Jacoby said she wanted the students take something away from her experience and to realize that her retelling the story is a psychological recovery.

Born in Hungary, she was around 10 or 11 years old when she first heard about Hitler’s hatred for the Jews. Jacoby said she could not comprehend why he hated them but she knew that he wanted the Jews dead.

“We don’t really know whether it was [Hitler’s] sick mind but we know what the results of his feelings were and it was to exterminate us,” Jacoby said.

She said that she was very unfortunate to be born as a Jew during this time considering the fate of most Jews during this era. All of her friends and family, with the exception of her mother and brother, were killed in gas chambers during the Holocaust. As a young girl she did not understand why this was happening and up to this day she still does not understand.

“This was total extermination. No choice of survival. You were undesirable when you were in Hungary as a Jew,” Jacoby said.Some Jews decided to convert in fear of being killed. Those who converted were taken to not have faith.

On March 19, 1944 Germany moved into Hungary and it did not matter if they were allies because the Jews living there were considered undesirable by Hitler.

“We didn’t believe the hatred he had for us and I bet you wouldn’t either,” Jacoby said.

Jacoby was 15 when she went to Auschwitz and she recalls seeing her grandparents being thrown into a cattle train. When they arrived, Jacoby told her grandmother, “see you later,” but little did she know that would be the last time she saw them. She admits that when she arrived to Auschwitz, she was very clueless and ignorant.

While she was in Auschwitz, she recollects how a man gave her a pot of soup. Jacoby hesitated and felt that she did not deserve it. She decided to distribute the soup to the people around her. She saw this as a sign of hope and her generous character showed through her innate desire to share her food with other hungry people.

CSUN Jewish Studies Professor Elaine Goodfriend was among the listeners of Jacoby’s experience and commented on her generous character, even in a time of starvation.

“That incident shows that even when you were put in a tough situation, you were still considerate and thought for others,” Goodfriend said. “If I was in your situation I would’ve chomped down as much soup as I could and would have not shared with anyone.”After the war, Jacoby was lucky enough to reunite with her brother who disappeared when the war started. Her brother along with other surviving Jews waited outside train stations all over Europe to greet any other survivors that returned.She lived in Hungary for two years after the war ended and then decided to immigrate to the United States when she was 16. She was denied citizenship because she was Hungarian. She decided to live with her uncle in Mexico until she could gather the money to get into the U.S. After gathering $1000 from her uncle and her mother, who was selling eggs, she hired a pilot to smuggle her into the U.S. and stayed at her cousin’s house.

A month later, the pilot got caught and the FBI arrested Jacoby. Jacoby and the FBI came to an agreement to where she had to notify the FBI where she was hiding every month for a year. After going through this tedious process, she married an American man and became a legal citizen.Eventually, Jacoby earned her Bachelor’s Degree in psychology from CSUN and worked various jobs throughout her life including being a sewer and a therapist

“I always did something that I didn’t know how to do,” Jacoby said. “You experience and you learn.”Since the war, she has gone back to Auschwitz three times. She went back to show her friends, to show her children, and to remind herself that the atrocities really did happen.

Jacoby said that something she will always remember is that her mother was her reason for staying alive during the holocaust and she was the reason her mother stayed alive as well.Twenty-year-old kinesiology major, Reva Raiken, expressed how she felt about Jacoby’s presentation.

Jacoby ended her presentation with a final note to the students to ensure something like the Holocaust could never happen again.

“Sitting in a class puts you in a place of social responsibility,” she said. “You live in a country where your worth is as good as mine. Appreciate who you are and what you have. We have to make sure something like this never happens again to anyone.”