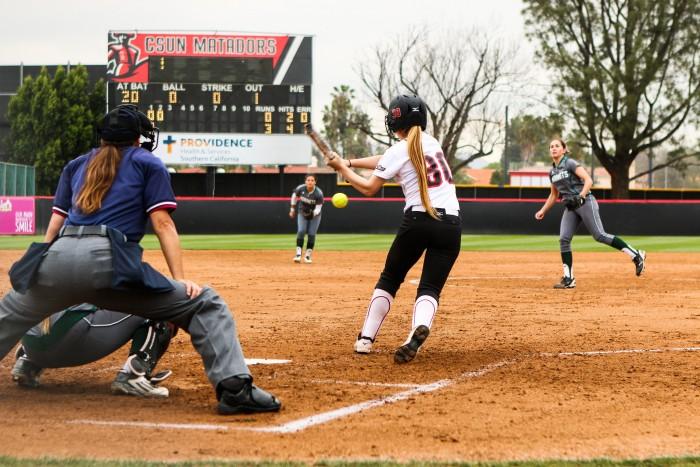 The Aggies managed to string together just two hits off of senior pitcher Brianna Elder and freshman hurler Zoe Conley en route to the Matador’s sixth conference win in as many games. Elder, who tossed the first four innings of the game, was awarded her 14th win for her efforts while Conley earned her second career save.

The Matadors jumped on the Aggies sophomore pitcher Dana Cruse early in the first inning. After CSUN drew a couple of walks to start the game, sophomore utility Katie Hooper got the Matadors on the board with a RBI single, scoring sophomore Taylor Nate. Freshman shortstop Savannah Horvath followed with a two RBI single up the middle to expand the lead to three. Cruse was pulled for junior pitcher Leah Munden shortly after before recording an out.

Hooper launched a third inning solo home run over the left-center field fence for her 12th bomb of the season. Hooper is now tied with two other former Matadors for the fifth most home runs in a single CSUN season. Horvath hit a solo home run of her own in the fifth inning, her eighth, to put the finishing touches on CSUN’s shutout victory.

The Matadors returns to Southern California for a week before heading off to UC Santa Barbara for another three game weekend series. The Gauchos (15-24, 2-4) dropped two of three games to the Cal Poly Mustangs over the weekend. The Matador’s 6-0 start in league play is their best conference start in that span since 1996.