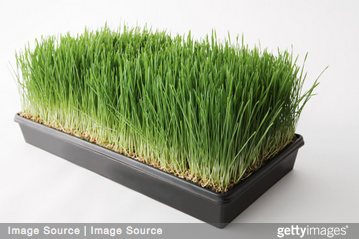 Contrary to what many people think, cows are not the only species that eat grass. Humans can eat it too, and it is considered a super food considering the amount of benefits it carries.

Wheatgrass is used to make medicines. It’s used as a good source of nutrients including vitamin A, vitamin C, vitamin E, iron and amino acids.

Two ounces of wheatgrass is nutritionally equivalent to five pounds of raw vegetables. It contains a high amount of calcium, magnesium, potassium, the full spectrum of B vitamins and is also a complete source of protein.

Wheatgrass is also used as a detoxifier of the liver and blood. It is most effective when the grass is juiced and consumed as a shot. However, many people buy the grass from local grocery stores and blend it in smoothies to mask the taste.

For something so powerful and beneficial, wheat grass is sold at local grocery stores for five dollars as raw grass. It can be bought it tablet form for anywhere from five to 20 dollars.

Wheat grass is a simple addition you can make to your daily diet while reaping the benefits for a lifetime.

To learn more about the benefits of wheat grass, go to: http://hippocratesinst.org/living-food/benefits-of-wheatgrass