On the Ice: The NHL Draft Edition 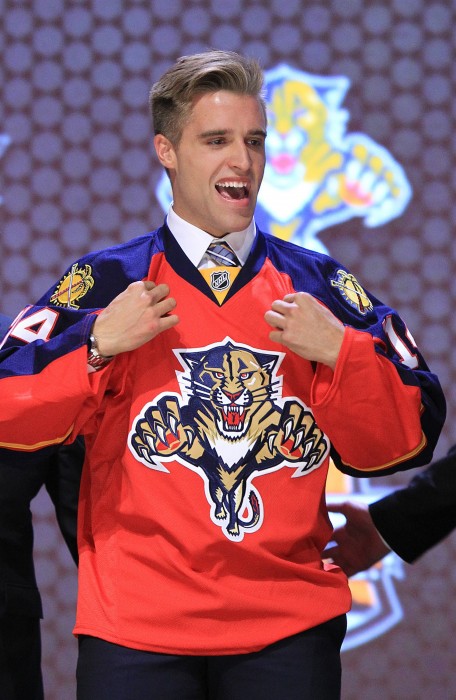 The Florida Panthers select Aaron Ekblad with the first pick of the NHL Draft on Friday, June 27, 2014, in Philadelphia.The Panthers will host the 2015 NHL Draft. (Charles Fox/Philadelphia Inquirer/MCT)

The debate surrounding the centers and who should be chosen first overall is practically irrelevant, because both of these guys have made strong cases for top pick consideration.

McDavid is in his third season for the Erie Otters of the Ontario Hockey League (OHL), while Eichel is in his freshman season playing NCAA Division-1 McDavidey for Boston University.

These 18-year-olds have been absolutely dominant in a year where every goal and assist has been under a microscope from scouts and organizations.

Somehow they’ve performed above expectations and have been astonishingly productive.

In different respects, the 6 foot 2 Eichel played in 38 games and led the NCAA in points (67) tallying 24 goals and 43 assists.

With less than three games left in the regular season, these are the odds for the 14 non-playoff teams winning the McDavid and Eichel sweepstakes:

Buffalo, Arizona and Edmonton are in prime position to receive number one honors depending on how they finish, while the other teams still have good chances.

Throughout the season, fans have even cheered for their teams to lose and Eichel gave a response about it.

Though he seems to think against tanking, these organizations and fans alike are salivating to get one of these two players.

In two months, the wait will be over and two teams will be rewarded.

The regular season is ending and playoffs are about to begin, but the McDavid and Eichel sweepstakes are just heating up.

The draft will be hosted by the Florida Panthers on June 26-27.