Employment—Any rise is a good rise 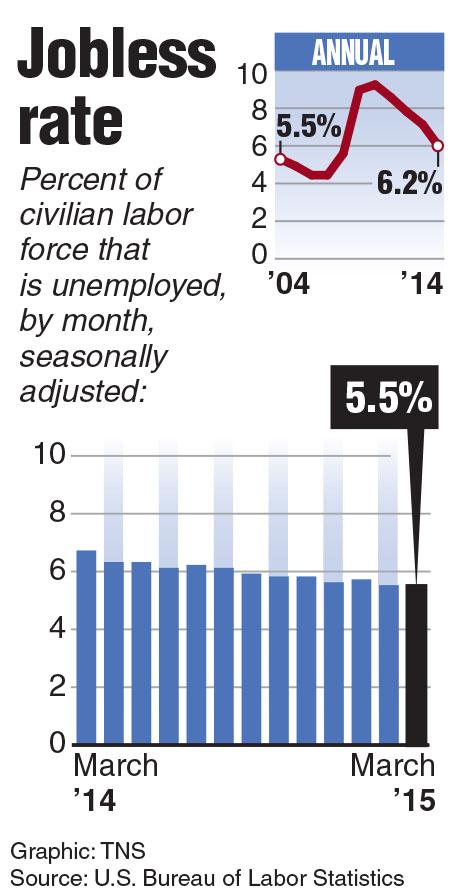 EDITORS: This graphic is optimized for use full-screen vertical on an iPhone. It may, of course, be used on other digital products and in print publications. Monthly economic indicator: Trend in U.S. unemployment rate. TNS 2015

For those of us who have had to search for jobs, we know that job hunting is not the easiest thing to do.

Filling out applications, having numerous interviews and still not getting the job that you want can be a huge letdown. One might simply feel discouraged but one must not simply give up.

Unemployment has been an issue for many people who are trying to make ends meet.In fact, there are 6,777,000 people who are unemployed in the country. Although there are many reasons for unemployment, some reasons tend to stand out more than most. These reasons include jumping between jobs, not having the necessary skills and deciding not to be employed.

Fortunately the job market has improved. Searching for a job—when there are jobs available— is better than not having one at all. While the job market is not at its best, 70 percent of Americans believe the economy is improving.The decrease in unemployment applications is beneficial to individuals because more jobs are available to those who need more income.

Seeing that so many people were losing their jobs, it is nice to know that more people are now able to work in order to support themselves. Although having more options for employment is good, there are some who still say that job opportunity in the U.S is still lacking. According to U.S.News people are having a difficult time finding a job because jobs aren’t paying well enough and demographics are changing.

The older generation think that younger people are replacing them, making it harder for them to get back on their feet after a bad recession. However, people need realize that the younger generation is helping create a more stable working environment.

Let’s face it, college is expensive. With the help of financial aid and loans students are able to attend college in the hopes of being able to sustain a real job. In the meantime, students have to find a job that will help get them by. Four out of five college students work part- time while managing a full load of classes.The balance between school and work can be quite tiresome.

I know that when I was first looking for a job, it took me over a year to finally land the right one. Even though the job in which I have isn’t my dream job, it helps to know that I am saving money in order to pursue a lifelong career.

With the unemployment applications declining, it shows that fewer people are losing their jobs. In the last two years, workers are not being fired or laid off as much as they used to. As a college student this is such a relief because one of the hardest things about losing a job is knowing that no income will be rolling in. Students will be happy to learn that more employers are beginning to hire graduates. This increases employment for graduate students by 9 percent. This shows that the economy is getting a little bit better. It may not be what it once was, but it’s a start from where we were in the beginning.

Unemployment may be declining, but there are always people who are looking to farther themselves in life. We have to learn to pick and choose our battles and to be appreciative of what we do have. We shouldn’t take our jobs for granted but should be more appreciative that we have a job because others aren’t so fortunate.