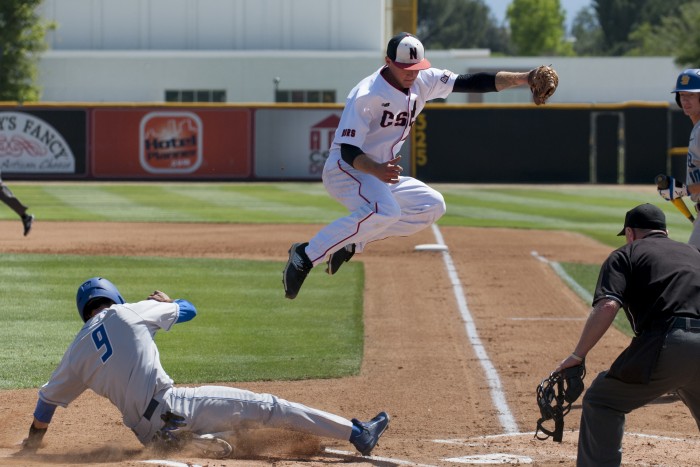 The game started with a UCSB leadoff double and then a barrage of first inning hits followed, pacing the Gauchos to an early 6-0 lead.

CSUN junior starting pitcher Calvin Copping was able to move past the tumultuous first inning, by allowing just one hit in his next four.

“It’s hard to do what Calvin did.” said CSUN head coach Greg Moore. “Obviously that wasn’t the way he drew it up, but to steady the game like he did, from the second [inning] on, is impressive.”

The Matadors bats slowly answered back by getting one run in the first and third innings, but the Matadors saved their best for the fourth inning.

They got five hits and two RBIs, bringing the game within two runs and freshman first baseman Nolan Bumstead felt confident about their at bats in that inning.

“It starts with the lead off guy.” said Bumstead. “[Once] you get that lead off guy on and string together quality at bats, then you’re able to generate a lot of offense.”

CSUN was on a four game losing streak, before this game, and the theme of this losing streak has been missed opportunities, which continued today.

The fourth inning was the Matadors most productive inning, but they left two runners on in scoring positions. This was one of three major missed opportunities.

In the fifth inning, CSUN sophomore catcher Dylan Alexander was caught in a rundown between first and second base, after trying to steal second. Junior Yusuke Akitoshi, who was on third base, attempted to steal home plate, since the rundown was occurring, but got thrown out to end the inning.

Then in the eighth inning, with CSUN down 6-4, they started to rally and the bases were loaded, but they couldn’t capitalize with runs.

Though there were missed opportunities, Matadors head coach Moore was pleased with his team’s hitting performance, 12 hits on the day, and their ability to compete with UCSB’s junior pitcher Dillon Tate.

Tate is ranked No. 30 in the top 50 prospects in the country.

“Their starter [Tate] is impressive, what our hitters did against him was also impressive, so I’m excited about how we swung the bats today.” said Moore.

Matadors starting pitcher Copping (4-3) picked up the loss, going five innings, allowed seven hits and six earned runs as his era jumps from 2.53 to 3.33 on the season.

Tate (5-3) on the other hand received the win for UCSB, going seven innings, allowed nine hits and four earned runs as his era rises from 1.34 to 1.73.