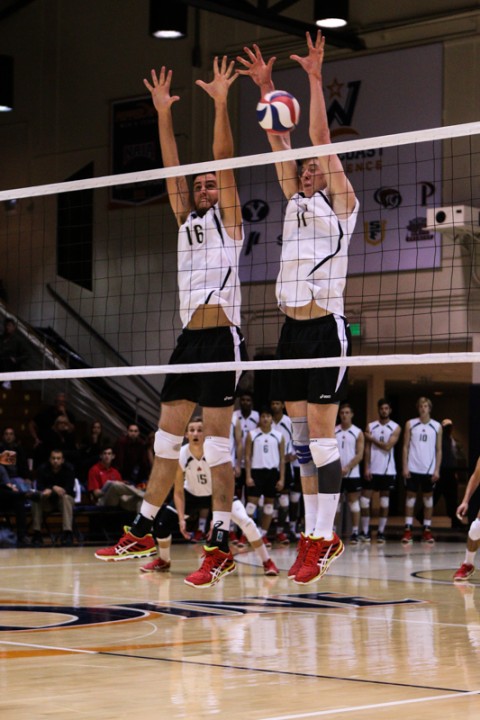 Both teams started off equal in hitting, kills, errors and attacks but by the second set the Cougars were hitting better than the Matadors while the third was a complete BYU takeover.

“If we win set one that’s a whole different match tonight, but the fact that we lost set one it just put us on a little bit of a downward spiral,” said head coach Jeff Campbell.

After starting off slow, the Matadors had to come from behind in the first set. BYU took an early lead and it took the Matadors until 7-7 to tie it, taking the lead at 11-11 with a block by sophomore opposite hitter Jakub Ciesla and freshman middle back Josiah Byers.

““In the first game we had a lot of energy, a lot of fire, we had a lot of opportunities to win and just didn’t really capitalize on that,” senior middle backer Greg Faulkner said.

However, the lead did not last long, the Cougars immediately answered back with a kill and the volleying of the score. BYU then took the lead, remaining one and two points ahead, until the Matadors were able to tie it at 23.

“We had a few errors that were really big and that’s what killed it for us and the energy kinda just pitfalls in that first set all the way down to the third set,” Faulkner said.

The second set started off with a Matador kill, but the Cougars soon took charge and built a lead. The Matadors caught up and tied the score at nine and had the lead at 11-10 with a kill from Faulkner.

The Matadors remained on top until a kill from BYU tied it at 16 and then a hit from Ciesla went off the court. BYU kept their lead, winning the set with a missed serve from Faulkner. This time, the Matadors were out hit .310 to .211, but were equal in kills with 13.

“Our passing really broke down, so when passing breaks down setting breaks down and makes it difficult; it definitely was the passing,” Campbell said.

Leading with a kill, the third set started off on a high note for the Matadors but they quickly fell to a 14-4 Cougar lead.

Poor calls by the refs, miscommunication, errors and a dominating BYU team was keeping the Matadors at bay. Unable to come back, the Matadors fell to the Cougars with a kill.

“We learned a lot (in the) first and second games so we can fix some of the mistakes that we had so we just have to go out tomorrow and just play hard,” sophomore outside hitter Bradley Sakaida said.

“Our guys played hard. So I’ll give them that; our guys played very hard,” Campbell said. It’s never bad to lose to a good team and BYU’s a very good team. They have good players and they’re well coached so you have to give them credit as well,” said Campbell.”

In their final MPSF game in the Matadome this season, the Matadors finish the series against BYU on Saturday, April 11 at 7 p.m.