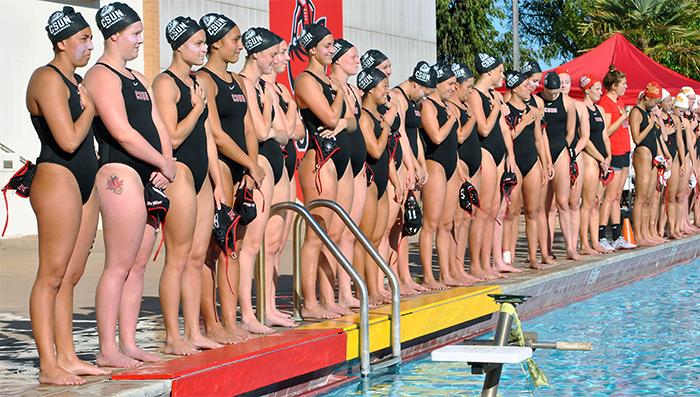 No. 9 CSUN Water Polo (14-10, 3-2 Big West) ended its regular season schedule on a high note with a gritty 8-6 victory over No. 13 UC Santa Barbara (12-15, 1-3 Big West) that moved them to second place behind UC Irvine in the Big West on Saturday afternoon at the Matador Pool.

Senior goalkeeper Kiernan Davis added to her long list of career achievements with seven more saves which moved her into a tie for second-place in school history with Garziella Caredda, both of whom have 763 career saves.

Davis also won the Dick Enberg Post-Graduate Scholarship for Academic Excellence at the end of March, which is presented to an outstanding CSUN student-athlete majoring in psychology, journalism or cinema, television, arts (CTVA). Davis said she plans to use the scholarship to help her complete her master’s in public administration.

Before the match began, hand-crafted collages were on display near the pool entrance with the players names, numbers and other pictures. Davis and fellow seniors Bianca Adams, Kelcy Barott, Kelcie Ferreira, MacKenzy Fowler, Katie Kammer and Marisa Young, were honored for their career accomplishments.

Both teams came out with a fury with the Gaunchos being the first to score with a goal in the third minute of the game. Three minutes later, Young scored her 214th goal of her career to tie the game at 1-1.

A goal by Miranda Schrader with 20 seconds left to play in the first put the Gauchos ahead 2-1. After the goal CSUN held the Gauchos scoreless for 16 straight minutes.

Goals by Fowler and freshman attacker Madeliene Sanchez gave the Matadors a 3-2 halftime lead. In the third quarter, Barott scored two goals, 29 seconds apart, to extend the lead to 5-2.

The Gauchos ended their scoreless drought with two goals to start the fourth quarter to trim the Matador’s lead to 5-4. CSUN took control with two goals from Fowler and a goal by Barott in the final period which gave both seniors a hat trick apiece for the contest.

The Gauchos scored two more goals but CSUN held firm for the 8-6 victory.

Along with her three goals, Barott registered seven steals for the Matadors, whiich pushed her season total to 28. Ferreira added five steals of her own, giving her a team-leading 44 on the season.

With their regular season over, the Matadors look to the Big West Championship in Honolulu, Hawaii. Depending on how the rest of the Big West Conference teams fare in the coming week, the Matadors will either begin the tournament on April 24 as a no. 3 seed or receive a first-round bye and play as a no. 2 seed on April 25.