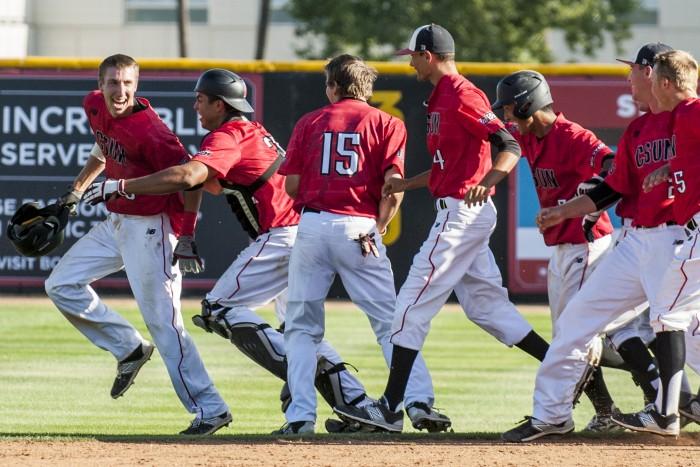 Junior third baseman William Colantono hit a walk-off single in the bottom of the 13th inning to give the Matadors a much needed victory.

“To Will’s credit, he stayed in there in that last at bat and didn’t try to do too much.” CSUN head coach Greg Moore said. “With a very good breaking ball, he just took it up the middle and took what they gave him.”

Through three innings it was a 1-1 game until the Gauchos scored a run in the fourth inning. The game stayed stayed at 2-1 until the ninth inning.

“[He] gave us our best chance for an extra base hit at that time,” Moore said about his decision on using O’Neil to pinch hit. “He did a nice job in the dugout of getting himself ready and you could see he was prepared.”

In the longest game of the season for the Matadors, the pitching staff was consistent and kept them in the ballgame despite the hitters’ struggles.

Junior starting pitcher Rayne Raven went six innings, allowed seven of the 12 hits and just one earned run. First out of the bullpen was freshman Joey Deceglie, who pitched the seventh inning and allowed one hit and no runs.

Junior relief pitcher Angel Rodriquez took over and was dominant, getting out of crucial jams in the extra innings, allowing just four hits and striking out five through 5.2 innings.

“I didn’t necessarily have a different mentality,” Rodriguez said about pitching in innings eight through 13. “I just think of it as the game restarting. I just had the mindset of going in and attacking.”

Senior relief pitcher Louis Cohen took over for Rodriquez in the 13th inning, where the count was 1-2 with two outs, and in a crucial moment he got the strikeout.

Cohen (2-0) received his second win of the season and UCSB’s freshman relief pitcher Kyle Nelson (1-1) received the loss, giving up the walk-off hit.

The Matadors look to build off of this Big West Conference win as they host non-conference opponent BYU on Monday at 3 p.m.