Slow start for “Game of Thrones” 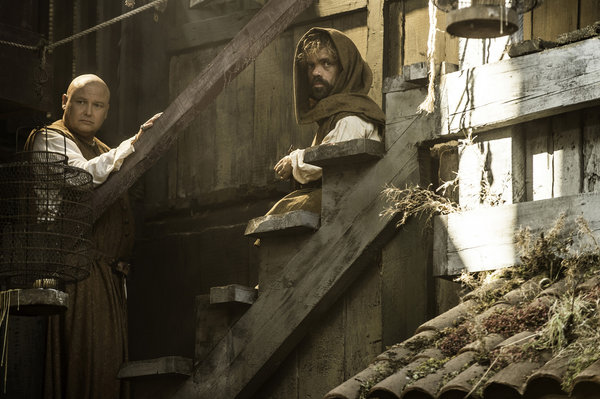 From left, Conleth Hill as Lord Varys and Peter Dinklage as Tyrion Lannister in "Game of Thrones." (HBO)

Follow @nicolettehinojo
!function(d,s,id){var js,fjs=d.getElementsByTagName(s)[0],p=/^http:/.test(d.location)?’http’:’https’;if(!d.getElementById(id)){js=d.createElement(s);js.id=id;js.src=p+’://platform.twitter.com/widgets.js’;fjs.parentNode.insertBefore(js,fjs);}}(document, ‘script’, ‘twitter-wjs’);
The premiere of “Game of Thrones” season five sees the aftermath of the previous season. The plot lines that are mentioned are that of the Lannisters, Daenerys Targaryen and what has just happened North of the Wall.

Overall, the episode was not too exciting. One of the more interesting scenes was a flashback of Cersei talking to a “witch” when she was younger in order to tell what her future would be.

The woman warns her she might not like the answers, but that doesn’t stop the stubborn little girl. Most of everything the woman predicts has already come true. Cersei marries a king but is only a queen for a time because a younger, prettier woman will come to take everything away. Could that be Margaery Tyrell?

Other things the woman mentions is that Cersei won’t bear the king’s children but she will have three children with golden crowns (hair), and “gold as shrouds.” Shrouds, of course, being a garment or cloth that a dead person is wrapped in.

The rest of the episode shows Daenerys struggling to control the cities she conquered, and also trying to control her dragons who seemed upset that they were locked up.

Another close encounter between a Stark and someone who could help them.

As for Tyrion, the guilt of killing his father and the woman he loved and betrayed him can be seen as he reverts back to his drunken ways. Lord Varys tries to reason with him, and by the end, tells Tyrion of the plan to help “save” the seven kingdoms.

Some things to know before watching the premiere of “Game of Thrones” would be how Margaery was supposed to marry Joffrey Baratheon/Lannister, but once he died (her grandmother poisoned him) she started to seduce his younger brother, King Tommen. Also, know that the wildlings and the men of the Night’s Watch were at war until Stannis’ army showed up and know that the wildlings only wanted to cross the Wall to escape what’s coming – the white walkers.

The premiere episode will not leave you wanting to run out and tell everyone what just happened, but it did do a good job with showing the aftermath of the exciting things that happened last season. Lets just hope the rest of the season will pick up.