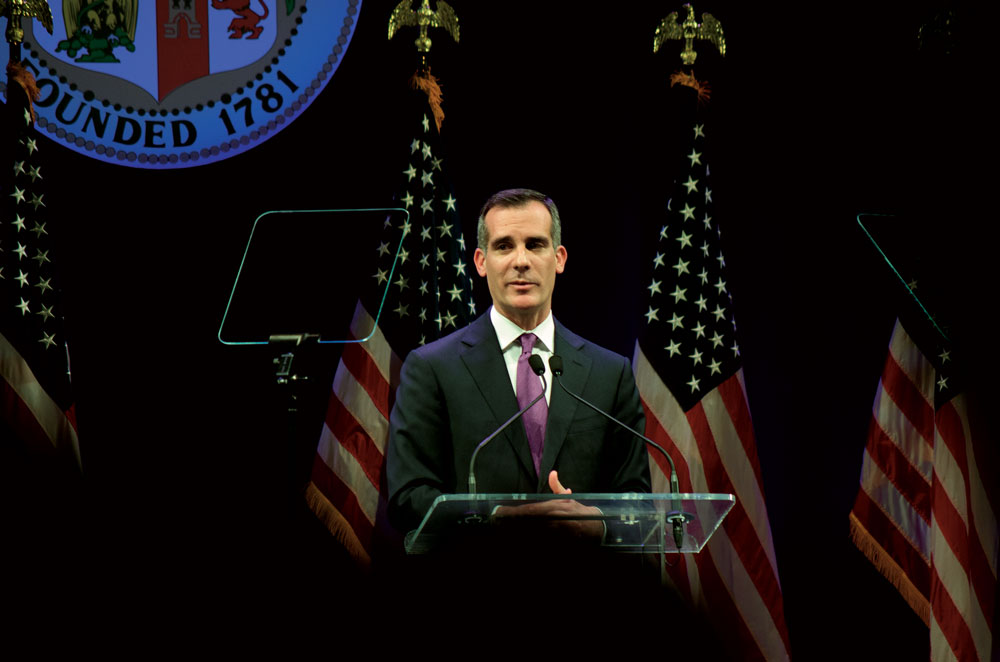 Standing on the stage of the Valley Performing Arts Center at CSUN, Los Angeles Mayor Eric Garcetti gave his second State of the City address, where he outlined numerous improvement campaigns in areas such as public safety, mass transit, and earthquake retrofitting.

The fact that CSUN had to endure the devastation brought on by the Northridge earthquake 21 years ago in 1994 was not lost on the mayor as he presented his address Tuesday afternoon. With 107 damaged buildings and parking structures destroyed, CSUN was one of the more heavily damaged sites after the Northridge earthquake in 1994, so it was fitting that he would introduce his Resilience by Design earthquake initiative on campus.

While introducing the initiative, Garcetti praised the university for rising out of the ashes post-earthquake within only one month of the main shock.

“And this campus wasn’t just rebuilt. It was reimagined, reborn as a global center of innovation,” the mayor said. “Today, CSUN leads the state in training new teachers; it’s a cradle of creativity, where the next generation of filmmakers and musicians explore their art.”

The initiative, overseen by USGS seismologist Dr. Lucy Jones, seeks to fortify buildings, the city’s water system and telecommunications networks, and will build on the cooperation of industry, business, government, and stakeholders.

The plan, according to the mayor, is the culmination of a year’s worth of work by Jones and dozens of staff.

“It is the most aggressive earthquake plan in the nation’s history,” the mayor said. “It will save buildings and more importantly, save lives. And the City Council and I are implementing in now.”

The mayor also spoke on the city’s initiative to digitize sanitation workers, allowing them to transition from using Thomas Guides to tablets.

However, in his remarks about sanitation workers, the mayor stopped short of mentioning the impending labor strike by city workers that is set to begin in his city any day.

“That’s egg on his face,” said Jacob Miller, city of Los Angeles animal care technician and SEIU Local 721 member of Garcetti choosing to remain mum on the subject. “It’s been the same since we started bargaining. They’ve been asking for too much on the backs of the city workers.”

About 20 SEIU members marched outside in protest outside the VPAC before, during and after Garcetti’s address. SEIU represents sanitation, port and harbor workers, LAX, animal services, and department of transportation, among other city sectors.

They have been working without a contract for several months. Their demands include the city return thousands of jobs cut during the recession and reverse a decision forcing workers to forgo raises for three years.

“The city is going to grind to a halt, and they’re going to realize how important it is, and that they need to treat the workers and the rest of the Angelinos with great dignity,” Miller said. “There’s still time for Garcetti work out a deal.”

Read the full text of Mayor Garcetti’s State of the City speech here.

When he took office 21 months ago, Garcetti said, the city was suffering from a billion dollar deficit. It had stopped fixing sidewalks, trimming trees, and hiring firefighters.

Touting his agenda to rise out of the ashes of the great recession that affected much of the country as “Getting Back to Basics,” Garcetti reported that the city of Los Angeles is strong and “roaring back.”

“You can see it across Los Angeles — from the cranes soaring over downtown and Warner Center, to the new rail lines that are being laid on Crenshaw, and west to the Pacific,” Garcetti said.

As the recession wanes, Garcetti said, the city has created 70,000 new jobs and has balanced its budget.

The mayor also introduced new initiatives in the area of transportation, including building new rail lines to LAX, as well as construction projects to remodel the airport, rebuilding eight more terminals and adding a new international terminal.

“I would like to do even more with the airport, but also to develop a network of airports,” opined Denny Schneider, LAX-Community Noise Roundtable chair and resident of Westchester after Garcetti’s address.

The mayor also announced plans to allow ride-share companies such as UBER and LYFT to pick up passengers from the airport. This was met with thunderous applause.

And in what has already been a benefit to CSUN students, Garcetti also promoted new bus lines that connect the San Fernando Valley to the Westside of Los Angeles.