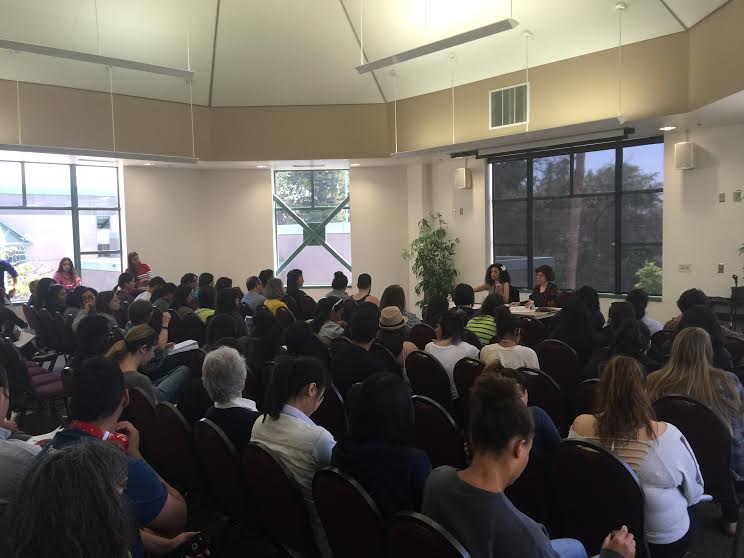 Masih Alinejad, award winning Iranian journalist and activist spoke about the work that led to her exile from Iran and the struggle for basic women's rights at Thousand Oak room located in the USU on Monday, April 3. Photo credit: Nate Perez

Masih Alinejad, an award-winning Iranian journalist and activist gave a lecture regarding women and human rights in Iran moderated by Dr. Nayereh Tohidi, director of middle eastern and Islamic studies and professor of gender and women’s studies on Monday in the USU’s Thousand Oaks Room.

“Compulsory Veiling and Stealthy Freedom In Iran,” the title of Alinejad’s lecture, spoke about the rise of her Facebook page, My Stealthy Freedom, which is dedicated to showing the faces of women in Iran without their hijab (A headscarf that covers the hair of women, only exposing their face) on.

The state of Iran allegedly criticized Alinejad by claiming she doesn’t wear a hijab because she wants fame. Others say there are bigger problems in Iran and Alinejad is not disagreeing. She says she is using her cause to give women a platform to talk about basic freedoms.

Men will never understand what wearing a hijab feels like in view of the fact that they’re not forced to wear it, according to Alinejad.

Alinejad isn’t against the hijab, she respects it and according to her, her sister and mother both wear scarves. She would like others to respect women who choose not to wear a hijab as well.

At the age of 19, Alinejad became an activist and was jailed for the first time while she was pregnant for distributing flyers that openly criticized the Iranian government. After being suspended as a reporter for parliament in 2009, she personally broke the news of the Iranian Green Movement that saw protesters beaten, imprisoned and killed. She was awarded the Omid Journalism Award, the Association for International Broadcasting Media Excellence Award and in 2015 she was awarded the Geneva Summit for Human Rights and Democracy award.

“She’s drawn a lot of international attention for the work she’s done,” said Dr. Tohidi. “This gives people the opportunity to learn about Iran, its people and culture.”

Farshid Ghavasiyeh, 34, is a big supporter of Alinejad and made the trek to CSUN’s campus, despite not being a student.

“She’s a famous journalist and I like her Facebook page,” said Ghavasiyeh. “I am Iranian and I come to hear her talk.”

Many people misunderstand Iran. “The politicians of Iran are not representative of the people in Iran,” said Alinejad.

In regards to the nuclear framework agreement between the US and Iran, the people of Iran are supportive and want there to be dialogue between the two countries.

Alinejad commented on the Iranian government having more of an open dialogue with its supposed enemy than the women that reside in Iran.

“[The Iranian government] can talk to their enemy, but not to their own women,” said Alinejad.