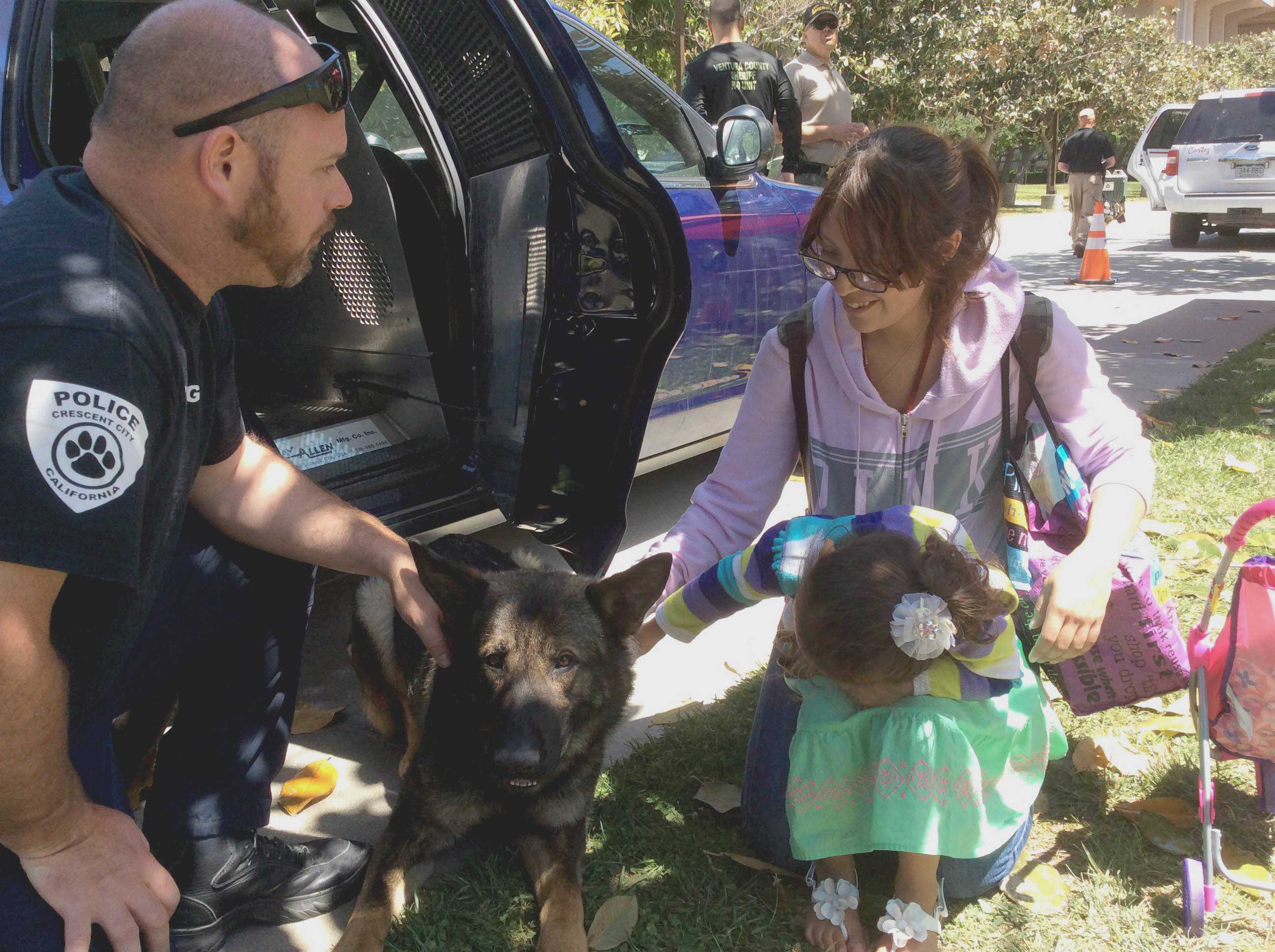 The CSUN Department of Police Services hosted a multi-agency police dog demonstration where members of the public and CSUN students got to meet and pet the dogs, in front of Bayramian Hall Wednesday afternoon.

“People say the dogs are malicious and they’re mean. It’s not true,” said Anthony Vargas, a CSUN PD K-9 handler of Mitch, a 7-and-a-half-year old German shepherd, who Vargas describes as a big ‘lovebug’. “A lot of times, they see the dogs in a negative light on TV. This [demonstration] leaves them in a positive light. They do their demo, they do their job, and then you can pet them.”

Most of the police dogs at the event, Vargas said, were born and received preliminary training in Germany. Training begins as early as 6 months of age. When the dogs come to the United States, they are already imbued with simple commands police officers can give in German.

The event also featured CSUN PD’s own police dogs, Isy and Mitch, and functioned as a fundraiser for the department’s K-9 program through the sale of T-shirts and dog toys.

“I’ve known that they’re dogs that protect and help, but I didn’t know that they would understand German. It was something new to me,” said Joselyn Cano, a senior CSUN psychology and Central American studies major, who attended the event with her daughter, Emily, 3. “I find it better and interesting to know that they’re around, that they could help.”

A police dog’s duties are varied, Moran said. In Otto’s case, he is trained for apprehension and narcotics search.

Police dog training is a lifelong process, Moran said. While the dog is owned by its respective police department, the officer can go home with their K-9 at the end of the day, allowing both to forge a bond. When the dog reaches retirement age, the officer has the option of buying the dog from the department.

“They’re ongoing from Day 1 until their career ends,” Moran said. “You attend the five-week academy to get certified. After that, you complete weekly trainings. They learn all the time.”

The K-9 demonstration has turned into an annual event, said CSUN PD Chief Anne P. Glavin, something the department had not planned when it was first organized. Due to the event’s popularity with the community, the chief said, CSUN PD will consider making the demonstration an annual event.

“One thing we’ve learned over time is how much CSUN loves their dogs, especially the students,” Glavin said. “We always have great attendance. It’s worked so darned well, we’ll do it for the community.”