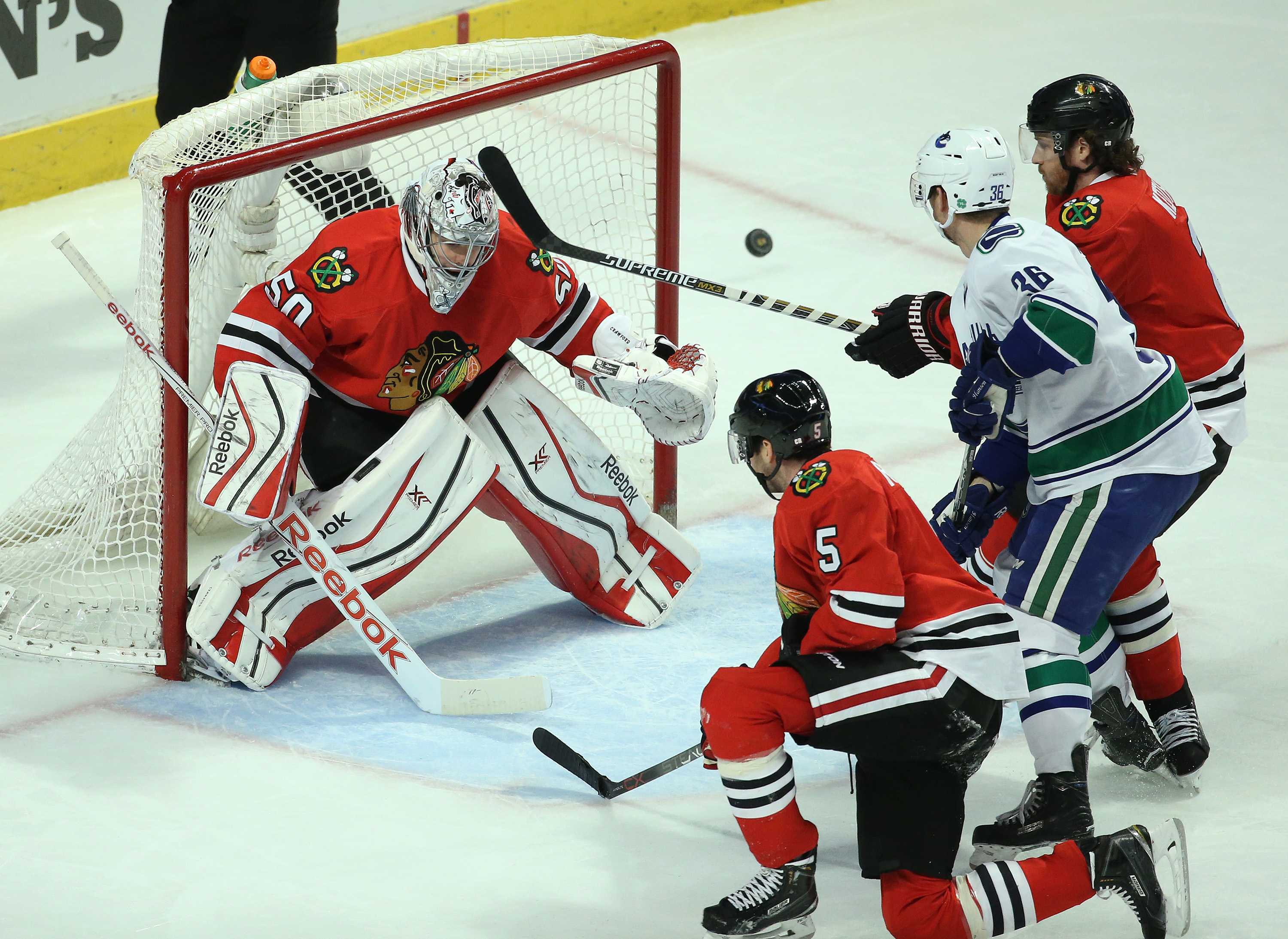 Chicago Blackhawks goalie Corey Crawford (50) defends his net against the Vancouver Canucks in the second period at the United Center in Chicago on Wednesday, Feb. 11, 2015. (John J. Kim/Chicago Tribune/TNS)

The teams are set and here are the finalized Western Conference playoff matchups:

The Ducks clinched the Western Conference regular season crown, as the best team, and are 6-4 in their last 10. The Jets are 6-3-1 in their last 10 and held on to the second wild card spot, though they posted an average March record of 8-7.

X-Factors: For Anaheim, forward Ryan Kesler is the most important piece to their success. Last year, the Ducks lost to the Kings in seven games and have been contending with the Blackhawks depth for years. Kesler gives them depth at the center position and he will have to start off fast against Winnipeg if the Ducks wants to go far. Also, star forward and consistent goal scorer, Corey Perry has only played in 67 games this season so his presence on the ice will definitely be a factors as well. For Winnipeg, goalies Ondrej Pavelec and Michael Hutchinson split a good amount of games this year. Pavelec had a 22-16-8 record while Hutchinson had a 21-10-5 record. This revolving goaltending duo must find ways to control the high powered Duck offense, because they will see a lot of shots towards the net.

The Ducks are a responsible puck possession team, so every save for Winnipeg’s goaltending duo will matter. Winnipeg does not have the luxury to make mistakes against a team who’s hitting on all cylinders right now. This is as close to a David and Goliath matchup, we will see, in this postseason.

St. Louis finished second in the west, though they tied Anaheim in points (109), and Minnesota finished sixth. Both teams are 6-3-1 in their last 10 games, but in the last game of the season the Blues beat the Wild 4-2 to tie the regular season series.

X-Factors: The Blues have incredible depth at defense and forward, but the outstanding play from 23-year-old Vladimir Tarasenko has turned the Blues into a Stanley Cup favorite. Tarasenko finished top 10 in points and he must continue this level of play if the Blues want to beat the Wild. The Blues have an all-around team and every year they seem to exit the playoffs earlier than expected, so another x factor is their head coach Ken Hitchcock. He must find ways to help his players excel in the postseason or they will be looking at an early exit once again. For the Wild, this is a veteran club with high playoff aspirations every year and with the mid-season acquisition of goalie Devan Dubnyk, a deep run could be possible. Dubnyk has had an amazing year in net, posting a 27-9-2 record, a 1.78 goals against average and a save percentage of .936. If the Wild’s offense can score goals, Dubnyk will be in a perfect position to close out games.

Nashville and Chicago are heading into the postseason posting sub-par records in their last 10 games. The Predators are 4-4-2 and the Blackhawks are 4-6.

Heading into this series, the Predators have Vezina and Norris trophy candidates in Pekka Rinne and Shea Weber. The Blackhawks, on the other hand, have Selke trophy favorite Jonathan Toews and a more confident Corey Crawford in net.

X-Factors: For Nashville, off-season trade acquisition forward James Neal must play consistent. He’s played in 67 games out of 82, this season, and in his last 15 games he’s only tallied three points. If the Predators want to beat Chicago, Neal is going to have to heat up and sooner rather than later. For Chicago, Patrick Kane’s return is huge and he’s now the biggest x factor of these playoffs. His return to the ice means everything for the Blackhawks and if you’re not convinced, Kane has missed almost two months and is still top 30 in points in the NHL. Kane returning for game 1 makes the Blackhawks a clear cup favorite, but can he perform well enough after coming off a long layoff.

Do the Predators have enough depth and scoring to beat Chicago, or will Kane’s return snap the Blackhawks out of their funk?

Both teams are 6-3-1 in their last 10 games while Vancouver is heading into this series on a three game win streak. In the beginning of the year nobody expected these two teams to make the playoffs over the Los Angeles Kings, Dallas Stars, San Jose Sharks or the Colorado Avalanche, but here they are.

Led by the top 15 point scoring duo of brothers Daniel and Henrik Sedin, the Canucks are back in playoffs and looking to make noise. The Flames are led by top 10 point scorer Jiri Hudler and Calder trophy (rookie of the year) favorite Johnny Gaudreau.

X-Factors: For the Canucks, all eyes should be on the blue liners led by defenceman Alexander Edler. The Canucks have plenty of offensive talent, but if the Canucks want to win this series then their defencemen will have to be the catalysts in controlling the tempo and slowing the fast paced Flames. For the Flames, their inexperience will be a factor so veteran goalie Jonas Hiller is their x factor. His postseason experience should be a factor in this series and help propel the Flames, if they want to win this series.