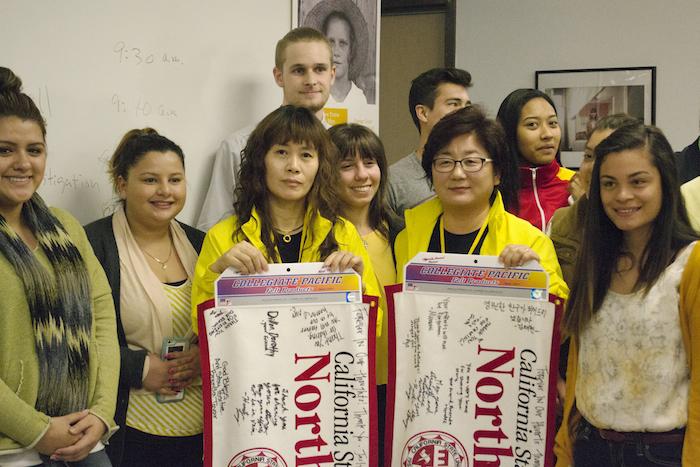 Hye Young Park and Young Mi Hong pose with the banners that were gifted to them by the Journalism students after their presentation. Photo credit: Irene Villalobos

On the Friday morning of March 6, nearly 6,000 miles away from their native country of South Korea, Young-mi Hong and Hye-young Park sat in a classroom at CSU Northridge, speaking to CSUN journalism students about the disaster that claimed their children’s lives last year.

That event is known as the Sewol Ferry disaster where more than 300 passengers – many of whom were students – drowned after the boat capsized and sunk.

Park and Hong’s visit to CSUN was part of a larger US tour intended to raise awareness of a number of unresolved issues surrounding the incident, such as the South Korean government’s mishandling of initial rescue efforts and the media’s failure to report accurate information in the early parts of the incident.

But in the days leading up to today’s one-year anniversary of the disaster, the victims’ families have publicly voiced and demonstrated their frustrations over their government’s sluggish attempts to establish closure.

The Day of the Incident

Shortly after the ferry began sinking on the morning of April 16, 2014, initial media reports stated that all passengers – many of whom were high school students – had been rescued safely.

Many South Korean parents rushed to rescue centers on the southern coast to meet their children.

However, as the day progressed, it became clear this wasn’t the case.

“The parents went down to the harbor thinking that their kids were all rescued, but in the middle of the day, they said that it was a misreport,” said Hong back in early March. Hong lost her son, Jae-wook, in the incident. “And if that was the case, it should have been reported that the children were still in the ferry and the ferry is flipped and sinking, but it wasn’t broadcasted on news media.”

This crucial miscommunication was a result of news media’s failure to fact check initial reports of the local Coast Guard’s rescue efforts, which were later proven to be false.

On top of this misrepresentation, according to Park and Hong, was the Coast Guard’s failure to mount adequate rescue efforts during crucial moments in the Sewol’s sinking.

“They were giving a briefing to the families…but there was an outbreak situation,” said Hong. “In the middle of briefing, they were telling us ‘This is how the rescue work is going right now,’ but a [private] diver appeared all of sudden and said ‘What are you talking about? This is what’s actually going on at the site. What are you giving the briefing on when there is no rescue work?’ Then they dragged him down [from the stage].”

A subsequent, 5-month investigation by the country’s Supreme Prosecutors Office revealed the Coast Guard had not acted quickly enough in the first hour of the accident, nor had they set up appropriate base camps around the site for underwater search efforts.

“Reveal the Truth, Raise the Sewol”

In the yearlong wake since the incident, the bereaved families of the victims and sympathizers have mobilized to bring attention to lingering issues.

The group has gone to considerable lengths to achieve these goals over the last year, including a hunger strike that, for one father, lasted 45 days.

They also successfully crowd-funded over $65,000 for a New York Times advertisement calling on South Korean President Park Geun-hye to launch a fully independent investigation looking into the alleged government mishandling of the situation.

Park and Hong’s visit to CSUN was part of a larger and more recent campaign that included the screening of the controversial documentary, “Diving Bell,” which probes the same allegations.

Kwang-pil Chung, a local Korean resident who accompanied and helped the two mothers during their LA trip, said most of those in attendance for the LA screening were supportive.

“Many of the audience members shared empathy for the two moms,” said Chung. “It was well received and [when] we had a Q&A session with the moms, we could see a lot of teary eyes.”

Chung was one of many US residents that joined the effort to raise global awareness and sympathy for these families.

“All [the families] can depend on is solidarity and emotional support from other community members from the entire globe,” said Chung. “That is the only thing they can depend on right now.”

Both mothers later rushed back to South Korea to join demonstrations in Seoul protesting the government’s failure to launch an independent investigation and attempts to bring them closure through monetary compensation.

About 70 parents rejected the proposal, saying the investigation was more important than any financial compensation and shaved their heads in a sign of protest and solidarity.

Back in March, Park and Hong echoed these sentiments, but also expressed their doubt over the South Korean government’s willingness to begin such an inquiry.

“The government, we think, is not really interested in the truth counsel,” said Park, who lost her daughter Yoon-min. “What we want is not compensation or anything. The reason why our children died – that’s what we want to know. We’re asking people to join us in finding out the truth.”

The Need for Responsible Journalism

Several local news outlets have since apologized for their misleading coverage.

But rather than completely losing faith in the news press, both mothers told aspiring CSUN journalists to dedicate themselves to becoming conscious members of society dedicated to revealing the truth.

“I know everyone here are people who are planning to be journalists, and I hope everyone deliver the news only based on facts,” said Park.

“Journalists are the ones who are responsible for the media of that era they’re living in,” said Hong. “Whether you become journalists or reporters, when you become a member of the society as a person with good conscience, the truthful media will win. I’m asking all of you to have this kind of attitude as journalists.”

If you’re interested in the best ways to report on disasters, check out these ten tips from South Korean reporters who covered the Sewol disaster.

Yoonju Lee contributed to this story.