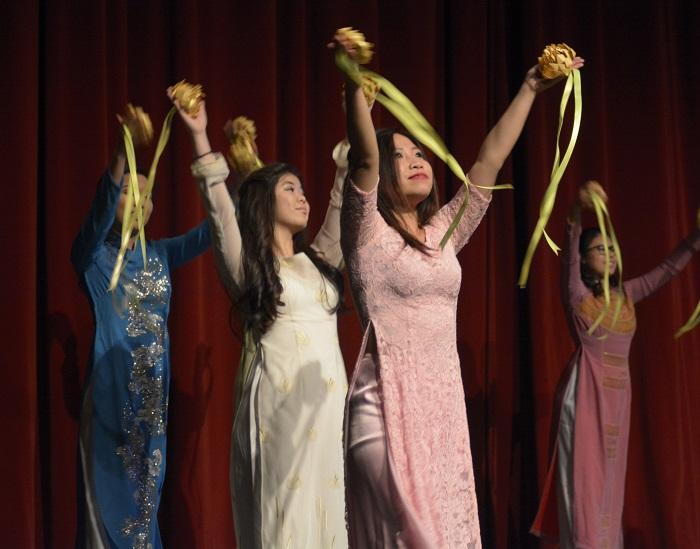 Domestic violence and acceptance was the key theme to this year’s Vietnamese Culture Night as VSA members from all over Southern California gathered to help support the CSUN chapter of the organization.

“We wanted to showcase more of a friendship and family thing,” said Internal VP and VCN Director Kimberly Vo. “If you have a family that is abusive towards you, you know you can always count on your friends and they will always have your back.”

Various VSA members performed in “Bonds”, a live-action play with short musical acts in between. After the intermission, the organization’s dance groups performed modern and traditional Vietnamese dances in between the scenes of the play..

Tran, the protagonist of the production, struggled with her father’s abuse, while gaining support from the other members of the VSA members on stage. The performers made it clear that VSA was more than just a collection of “traditionally looking Vietnamese people.”

The audience was engaged with the performance, shouting words of encouragement to their friends on stage in between scenes and set changes.

Asher Reeves, a 21 year-old California State University Long Beach student, was one of the off-campus VSA members to stop by the event, and expressed his love for both the VSA, and Friday night’s production.

“Each school has their own talent that comes in, and their way of doing the VCN rendition,” said Reeves. “I like their performance, it’s pretty good.”

Non-Vietnamese attendees had the opportunity to learn a little about Vietnamese culture during the dance team’s traditional routine.

“The clothes they wore, and the dance they did was awesome,” said Azeez Ogunade, a 20-year-old business management major. “Honestly, I came here for a class but I enjoyed the show. I thought it was really cool.”

The event concluded with a flower ceremony and a special acknowledgement given to Vo for stepping in at the last minute to help write the script and direct the performance.

“It was exciting and stressful,” said Vo. ” The performance was great, I didn’t really get to watch it because I was backstage, but from what I heard and the audience engagement, it sounded really great.”