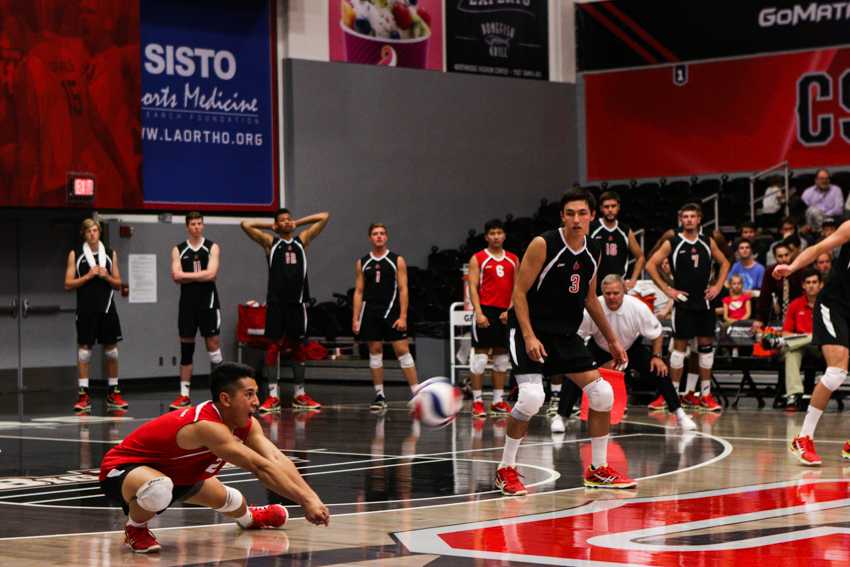 Taking the first set on a three point run starting with a kill from senior middle back Greg Faulkner, the Matadors took advantage of the nine kills they had in the set. Long Beach (15-12, 11-11 MPSF) had 13 kills but hit .179 (to the Matadors .292) with eight attack errors, one of them being part of the three point run that won the set for CSUN.

Set two had the Matadors on top for most of the set. There were several lead changes and tie scores, but it was until 24-24 that any real damage was done. A Long Beach three point run leading off with a service error from sophomore outside hitter Bradley Sakaida followed by two Long Beach kills took the set. It was identical to the previous set, just going for the opposite team.

Long Beach started out on top of the third set and remained there until the end. Long Beach took a four point run at 12-12, which CSUN could not recover from. The largest lead Long Beach gained was by seven points at 16-23 and from here victory was a sure thing. The Matadors had back to back kills to push them to 18, but Long Beach answered pushing them to 25 and the set title.

The Matadors came through in the fourth set starting out on top and never allowing Long Beach to gain the lead. There were no lead changes in the match and no tie scores. The Matadors hit .194 to Long Beach’s .031 in the set and had 13 kills to their seven.

In the match and Matador season finale, CSUN was looking to put a damper on Long Beach’s senior night. With nine tie scores in the set, the Matadors remained just behind Long Beach. Tied at 12, a Long Beach kill forced the Matadors into a time out. Upon return, a block from Faulkner and red-shirt freshman opposite hitter Arvis Greene Jr. tied it back at 13. Then came a Long Beach kill, only to be answered by one from Sakaida. A Faulkner service error followed by a Long Beach block won the set and match.

Leading the Matadors with 12 kills each were Greene and sophomore opposite hitter Jakub Ciesla. Greene also set a new career-high on 28 swings. Ciesla hit his third double-double of the season (leading the team) while also adding 11 digs and taking a total 41 swings.

In their final match as Matadors, seniors Travis Magorien, Kyle Stevenson and Faulkner left everything they had on the court. Magorien had 24 assists with two digs, Stevenson had two kills, two digs and one block and Faulkner had four kills and four blocks.

The Matadors finish their season 10-18 overall and 7-15 in the MPSF. Graduating just three seniors, 18 will be returning next season in hopes of an MPSF Tournament bid and the NCAA Championship.