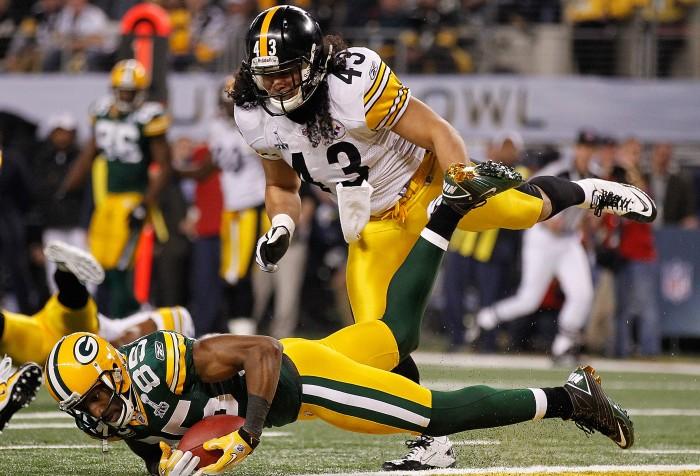 "And the fact that Polamalu was one of the players who were able to transcend part of the transition of the NFL to a quarterback league says enough about what type of safety he was." (Dave Eulitt/Kansas City Star/MCT)

After 12 seasons of playing in the National Football League – all with the Pittsburgh Steelers – Troy Polamalu decided to retire on April 10. Examining Polamalu’s place in the history of the NFL is tricky: his legacy is both delicate and certain. On one hand he was one of the most important pieces during the revival of one of the most successful franchises in NFL history, helping the Steelers of the early 21st century to two super bowl wins after the Pittsburgh franchise went more than 20 years without a championship. But, on the other hand, Polamalu played as a safety, one of the many positions on the defensive end that are overshadowed by the pomp and glamour of their offensive counterparts.

Polamalu’s career runs parallel to the career of his now former teammate Ben Roethlisberger. They were drafted only a year apart and were both on the super bowl winning teams of 2006 and 2009. But Roethlisberger’s career seems to be shrouded by controversy (which is often forgotten because of his entertainment value,) while Polamalu’s skill at the safety position was sometimes overlooked in favor of the flashier quarterback. Then again, this is the Pittsburgh Steelers, a team with a city that values its long line of strong defensive teams, going back to the “Steel Curtain” of the 1970s.

In a way, Polamalu’s legacy hinges on the fact that the NFL of the 21st century is a “quarterback driven league,” whereas in the past there was more room for a defensive player to make an impact. League rules limit – perhaps for the better, considering the safety concerns – what a defensive player can and cannot do on the field. If he played in the 1970s, Polamalu may have been able to hit harder, play at a faster pace more recklessly than he did in his career.

So what will Polamalu’s legacy be? As it is now, there are brackets around it, brackets that limit the scope of what he was able to accomplish as a safety. This impacts every defensive player, particularly those who play in the secondary. And the fact that Polamalu was one of the players who were able to transcend part of the transition of the NFL to a quarterback league says enough about what type of safety he was.

Polamalu was able to have an important career at a defensive position because he gave up his body on every down. Such a use of the body is common for great defensive players, who often sustain a lot of damage to their bodies in order to dominate opponents.

But Polamalu was also able to act as a model for defensive players with more exposure than normal, using his hair to promote certain products. Maybe his true legacy lies in his million dollar insured hair.