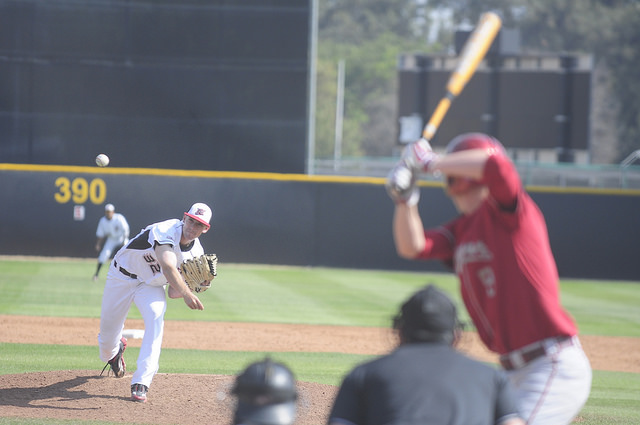 Relief pitcher Angel Rodriguez pitched two shutout innings in the eighth and ninth to close out the game.

The Matadors struck first when Bumstead hit an RBI single to score Toerner and then in the top of the second inning, Alexander led off the inning with a double and would later score thanks to a two-out RBI single by Colantono to give CSUN the early 2-0 lead.

The Rainbow Warriors would then take a 3-2 lead in the bottom of the third inning due to two Hawaii hits and two throwing errors by Akitoshi allowing three unearned runs to score.

The Matadors would not be denied though as they were able to retake the lead in the top of the sixth inning thanks to RBI singles by Akitoshi and Alexander to give CSUN a 4-3 lead.

Despite the rough third inning, Raven was dominant for the rest of the game as he 12 of the final 13 batters he faced.

The CSUN pitching staff allowed only four earned runs in the weekend series with Hawaii.

CSUN Baseball returns home for its final midweek home game of the season with a Tuesday afternoon contest with San Diego State. First pitch is slated for 3 p.m.

Meanwhile, on Saturday the team fell for a second straight night to Hawaii Rainbow Warriors by the final of 3-1.

Senior pitcher Jerry Keel received his fourth loss of the season, as he tossed six innings while giving up three runs and five hits. He struck out four batters, but did have some control issues as he walked six.

Hawaii jumped out to an early 2-0 lead in the bottom of the first after two RBI singles.

The Matadors scored their first run of the game in the top of the third inning thanks to an RBI single by designated hitter Nolan Bumstead to score short stop Yusuke Akitoshi.

CSUN placed runners on the base paths in seven of the nine frames, but the Rainbow Warriors defense proved to be the difference as the Matador base runners were caught stealing in the fourth, fifth and sixth innings.

CSUN trailed by one run until the sixth inning when Hawaii struck for another run. Keel gave up a two-out RBI single to give Hawaii a 3-1 lead.

The Matadors would not be able to rally in the final three innings, as the Hawaii starting pitcher retired six of the final seven batters he faced. Rainbow Warriors closer came in a pitched a scoreless ninth to pick up the save.