CSUN professor gets first-hand experience of what she teaches 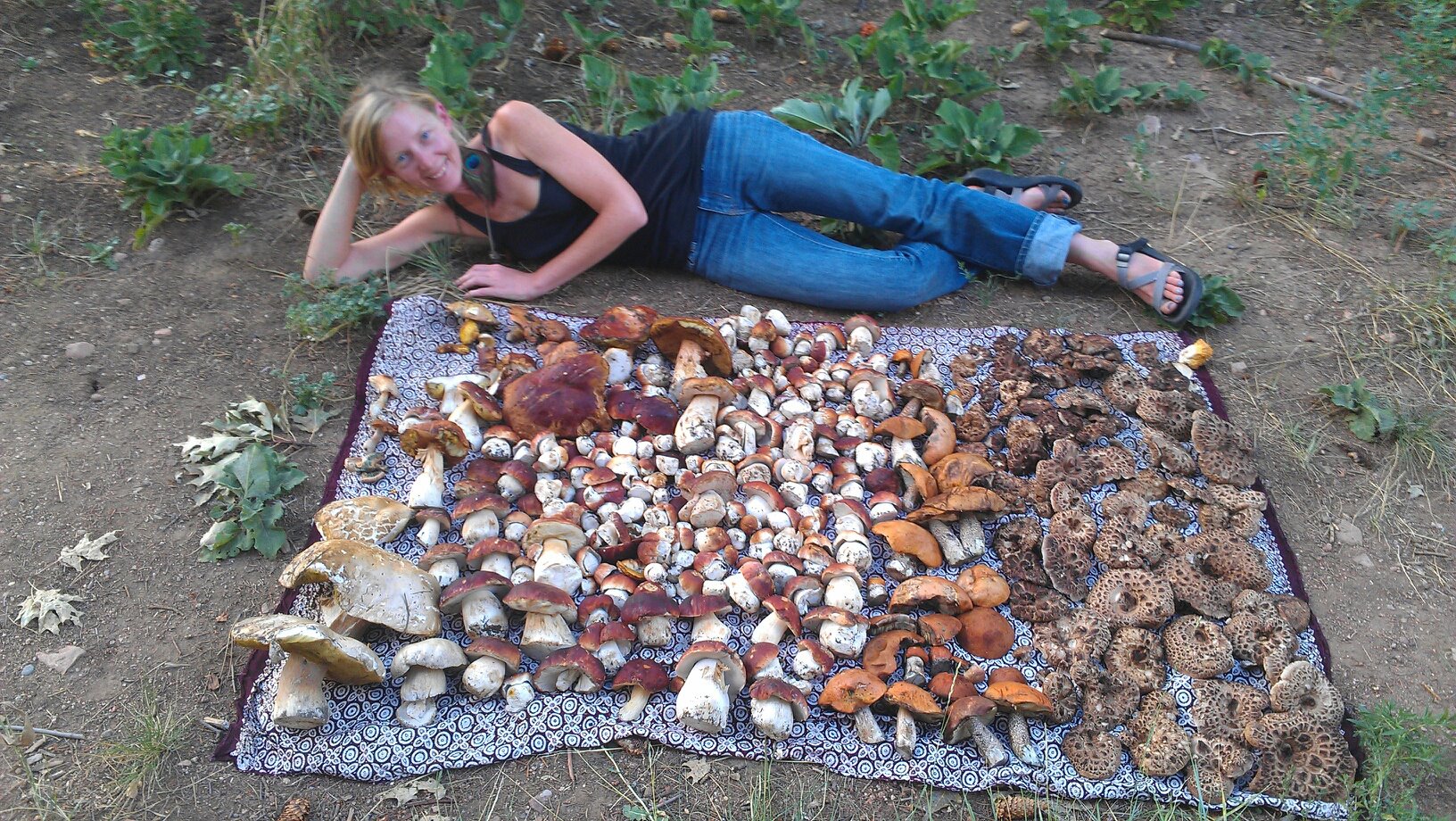 In 2012, after spotting a freshly killed red fox on a country back road, Erica Wohldmann decided to pick it up and take it home. When she got home, she skinned it, cooked the leg quarters and even decided to cook the heart and eat that as well. As a long time-vegetarian, this is something she normally does not engage in.

“It was still warm,” Wohldmann said. “Eating this meat was a powerful experience. I ate its heart, something I would never do in a normal situation. If we’re going to eat meat, a highly unsustainable practice, I figure there’s not better way to do it. Talk about reconnecting with our food!”

Wohldmann says this experience was about reconnecting with nature, through food, as a way to mitigate the environmental and social problems commonly faced by our population. She refers to herself as a dumpster diver or ‘freegan’.

She started dumpster diving in 2008 after she saw other people doing it. She became curious and tried it herself.

When she saw how much perfectly good food was going to waste, being a freegan immediately sparked her interest. She started gathering food and feeding homeless people. She admits that although she does not need to eat trash and has the money to purchase other goods from the grocery store, she does so for philosophical reasons as it helps her to better understand the human condition.

“Eating from the land was much simpler than digging through grocery store bins,” she said. “In the US, we throw away nearly 3000 pounds of food per second. In LA, there are nearly 2 million food insecure people. Something is wrong.”

Wohldmann understands that dumpster diving is illegal and a form of trespassing, so she says she does not recommend this to others. However, when she takes her beliefs and practices seriously, this is ultimately helping sustain and feed hungry people that shouldn’t be struggling to find food in the first place considering California is the main producer of 60 percent of the nation’s agriculture.

Wohldmann has a joint Ph.D. in Cognitive Psychology and Cognitive Science from the University of Colorado, Boulder. She is also an Associate Professor at California State University Northridge where she teaches classes related to the psychology and social influences on food, as well as the best practices in sustainability and ecopsychology. During one of her sustainability classes, Wohldmann says one of her students told her that society cannot simply go back to hunter and gatherer days; that we are far too progressive as a society to be able to revert to that lifestyle and be able to survive.

She decided to spend six months travelling through national forests across sixteen of the western states in the United States, foraging her own food and making her own medicines using everything that nature provides without the help of factories, pharmacies, grocery stores and other urban producers.

Going into this journey, Wohldmann said she did not know a lot about foraging her own food.

Luckily, she was about to reach out to locals she passed by, gathering tips from them and engaging in conversations with these nature-bound strangers helped her reconnect with home-cooked meals.

“Being somewhat shy, and raised in a culture that discourages talking to strangers, connecting with others didn’t come easy for me, but this trip forever changed that,” Wohldmann said. “I learned that when we tear down walls and stop building fences, when we end the wars within our families, only then can we work together to turn our shared wants into a shared reality. Plus, talking to strangers often meant being invited home for dinner, which counted as foraging in my book. So, in that way, connecting with humanity also meant connecting with food, good home-cooked food.”

Wohldmann’s experience in nature taught her how to manage and survive on her own without the help of factories, grocery stores, the internet, and cultivators to help her.

“Out in the forest, I learned to eat more than 60 species of edible mushrooms, tens of different kinds of berries, and brewed up herbal beer on the fire,” she said. “I learned how to use acorns and wild seeds for making fire-bread and pancakes and I ate way more greens than I normally do at home. I also fished a couple of times, which was difficult given that it required something I am terrible at: killing.”

Learning to forage food was not the only positive effect the journey through nature had on her. She says that she became emotionally connected with the planet as a result and learned to appreciate the simplicities of life and the value of the environment that society is doing a lot of damage to.

“I felt a more literal connection to nature,” she said. “My emotional experiences shifted with the changes in landscape and weather. I wept at the destruction left behind by loggers, feeling the loss of the trees that provided shelter from the rain and shade from the sun on my long days of hiking, but understanding our need for houses and paper. I felt a deep gratitude and joy for rain that brought mushrooms and life, and suffered in places where the water no longer flowed. My brain understood the concept of interconnectedness, and after this journey, my heart knew it too.”

Wohldmann’s strong beliefs prompted her to work as an activist and environmentalist. She now travels around the nation giving lectures where she shares her findings from research and various studies. Much of her work is published on Planet Experts, which displays a lot of her powerful articles on her journey and conclusions that are also reflected in her teachings.

Outside of lecturing around the country, Wohldmann also shares her knowledge with the Los Angles community where she teaches about wild food foraging and medicinal beer brewing, speaks at festivals, and offers workshops at primitive skills gatherings. On top of that, she also teaches kundalini yoga and meditates everyday. Wohldmann also says she helped launched the institute for sustainability at CSUN.

Considering she has a very strong connection with nature, Wohldmann calls herself a pathological optimist.

“Some of my friends say I’m the happiest person they know,” she said. “I practice that daily.”

Wohldmann keeps a very busy schedule as an activist, environmentalist, yoga teacher, and professor. She says that her job at CSUN, although far removed from her experiences in nature, helps her spread her ideals to other intellectuals.

“I love my job at CSUN,” Wohldmann said. “I love the intellectually curious students, my colleagues, and how supported I feel here. I get paid to think, to educate the next generation of change-makers, and to conduct research aimed at understanding how the mind works. Being at CSUN has opened up a lot of opportunities that would not have been available to me otherwise.”

Although Wohldmann thrives off of her connection with nature and her overall happiness that stemmed from it, she considers herself a regular civilian.

“I’d say I’m pretty normal,” she said. “I like to hike, surf, ride my bike, read, write, and sing in the car. You know, all that normal stuff. I have a lust for life.”

Wohldmann is seen as much more than normal to her students, however. Twenty-two-year-old Nutrition major, Lindsey Bundrant, commented on how she sees Wohldmann as a superb human being who does a lot to make the world a better place.

“She is able to have this constant spirit about her,” Bundrant said. “She is awesome because she acts on her passions. She sees possibilities and actually does something about it and it is inspiring.”

Wohldmann is in the process of spreading her knowledge even further by transcribing her experiences into a book called “Chasing Rain: A Forager’s Tale of Reconnecting with the Wild.”

The book entails her experience as she journeyed through sixteen states living off of the forest.

After her experience living in nature, Wohldmann also says she went to the Brazilian Amazon jungle last summer and foraged with indigenous people.

“I ate a juicy grub that tasted like coconut, seriously,” she said. “It was delicious but strange, kind of like a cherry tomato… pop.”

Twenty-four-year-old business major, Anna Torres, feels inspired to have Wohldmann as one of her instructors given her first-hand experiences on the subjects she teaches.

“She is definitely inspiring,” Torres said. “She makes it known that most of the decisions we make are subconscious and she helps bring it to our conscious mind.”

As an educator, food activist, and community leader in sustainability practices, Wohldmann works to create a more environmentally conscious planet. Her powerful journey through national forests gave her a deeper connection with nature, which helped her to better understand the human condition in which she fights for.

“I love the way being in a thick forest with its earthy smell makes me feel nurtured, the way the desert, everything working its hardest to survive, makes me feel like a champion; the way a hug from my dad feels when I really need it, the smell of rain, the taste of avocado, and the colors, tastes, and sounds of Central America. I love learning about everything this beautiful life has to offer.”