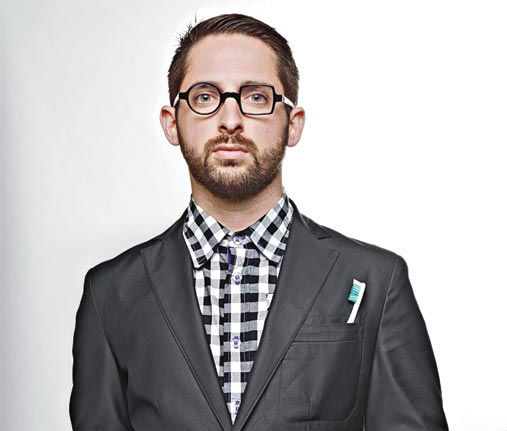 The entrepreneur behind the world’s first “T-shirt bakery” and the classic cupcake and crossbones T-shirt logo will speak at CSUN. Johnny Earle, creator of Johnny Cupcakes, will tell his story about how he started his T-shirt brand from the trunk of his car at age 19 and grew his passion into a multi-million dollar business.

Earle has been named America’s No.1 Young Entrepreneur by BusinessWeek and has been featured on NPR, MTV and some of his tote bags have been used in the Seth Rogan movie, This Is The End. His food-themed clothing brand pokes fun at pop-culture and reinvented iconic references with cupcakes, according to Earle’s website. He has collaborated with Nickelodeon, The Simpsons, Hello Kitty and Coachella.

Earle will share his entrepreneurial tips at 10 a.m., Thursday, April 30 at the Northridge Center. Tickets are $5 with a valid CSUN I.D. and $7 for general admission. The two hour lecture will also have a GoPro raffle and a surprise gift for attendees, according to the Delta Sigma Pi event flyer.

What is Johnny Cupcakes?

Johnny Cupcakes is the name of my T-shirt brand and we are the world’s first T-shirt bakery. To go along with the T-shirt brand’s name, we have retail stores that look and smell just like actual bakeries. We display graphic T-shirts inside of refrigerators and inside of vintage ovens. My retail stores smell like frosting and even when you purchase a T-shirt we package them in little pastry boxes, so you have a complete retail shopping experience anytime you purchase a Johnny Cupcakes T-shirt.

My name is Johnny, I’m based out of Boston, Mass., and I started this brand when I was 18-19 years old. I was inspired to some day work for myself so I can spend more time with the people that I love. I started 16 businesses before I was 16 years old and then I eventually started this Johnny Cupcakes brand.

How did your business get the name Johnny Cupcakes?

I was working in a record shop in Boston, Mass., and I received a tremendous amount of nicknames. Since my name’s Johnny–people would call me Johnny Appleseed. When I was late for work they’d call me Johnny-come-lately, and Johnny Cupcakes came out of nowhere. I put it on a shirt as a joke and I wore it to work and all of the slightly miserable customers that never make eye contact with me started laughing and saying, “What is that? Where can I get one of those T-shirts?”

So I started making more T-shirts and poking fun at pop culture and replacing popular icons with cupcakes. Whether it be the Statue of Liberty holding a cupcake instead or a torch, or a plane dropping cupcakes instead of bombs. It was just a fun little project that I was doing and it started to blow up.

What inspired you to be an entrepreneur?

As a kid, I would see my family spend a lot of time commuting to work. They spent so much time driving to and from the city, that they didn’t have too much time to raise my little sister and I. That made me want to figure out a way to be happy doing what I love and to someday work for myself so that I can make more time for the people that I love. I was inspired by their work ethics. I started 16 businesses before I was 16 years old. I started with lemonade stands, yard sales, I would sell drinks on the beach, I would sell candy in school and I would make more money selling candy then my friends would selling drugs. Around Halloween, my friend and I would set up haunted houses in his backyard and we would charge people $1 a ticket. I did magic at birthday parties at one point, I was a DJ, I had a scarf business, so I had a lot of different things that I was trying out.

I think the key is any entrepreneur or any person with an idea or passion, is that you can’t be afraid of failing. People have brilliant ideas and I meet people all the time that have million dollar ideas but so many people get haunted by the “what-ifs.” They’re like, “What if it doesn’t work out? What if my parents don’t approve?” You really have to just jump into it and try things out and not be afraid to fail. I’ve failed so many times and I still fail every day, but the more I fail, the chance of me succeeding becomes greater and greater. I get to learn hands-on from all those mistakes that I make.

What’s something most people don’t know about you?

Most people don’t know that I was a magician at one point. When I was eight years old, it was one of my first gigs and I used to get paid $20 a half-hour to do magic. And I really love ping-pong and I’m going to be in a ping-pong tournament soon. Perhaps if there’s a ping pong table at CSUN, maybe I’ll challenge somebody.

What makes you get up and go to work everyday?

Do people often mistake your name for a cupcake bakery?

Everyday we have people coming in looking for real food and we have terrible reviews on all those food websites. But I will say, 100 percent of the people that leave my stores, whether they leave upset and hungry or whether they leave happy and with a T-shirt, 100 percent of those people leave with an experience and a story to share. By me taking my advertising budget and by putting it into unique experiences, all the people that enter my stores leave with a story to tell and they end up doing the advertising for us.

One other funny thing–on April Fool’s Day, we sold real cupcakes and we hid all of our T-shirts. We had customers that drove all the way down from San Francisco to our Los Angeles store on 7959 Melrose Ave in West Hollywood. They came into our store looking to buy T-shirts, but we just had cupcakes that day. It was funny and we recorded everybody’s reactions and put it on YouTube. We did the same thing at our Boston shop too.

What is one of the most popular T-shirt designs?

I’d say the most popular T-shirt design is our classic cupcake and cross bones logo. It’s very simple and funny and easy to remember and it gets a lot of people curious and talking.

Does your business give back to any philanthropies?

Yes, we work with charities every single day. People reach out to us and whether we donate our time or products for raffles to rise money, we try to do that as much as we can. We encourage anybody to reach out to us and let us know if there’s anyone we should work with.

Why should CSUN students attend the event?

Students should attend the event because it’s fun…and I’m probably going to be giving out some surprises to people that attend. Whether people decide to work for themselves or for another cool company, I’m going to give people all the things that I’ve learned to do and not to do to become successful, so that all of you guys can take notes on that and it will help everybody become a better entrepreneur- follow their passions and become happier much quicker.

Why did you choose CSUN to speak at?

We were reached out to a few times and a lot of students wanted me to speak at the school. We finally came up with a date and it’s happening. I’ll be there soon. Have people spread the word, mark their calendars and like I said I’m going to try to have a special treat for almost everyone who comes out free.

What are you most excited about for the event?

I think now it’s such an important time for students to start a business because you can get extra credit in school, you can market your ideas to fellow students and you can make money while going to school. If I could go back in time, I would start my business while i was in school because there’s also many resources that you can use for free–from the print shop, to working with photographers on campus, to getting free advice that usually costs money when you’re out of school. I’m excited to help all the students become better entrepreneurs and to take more risks and have fun doing what they love.

Did you graduate from college?

I did not, unfortunately. I ended up taking a break to go touring with a hardcore metal band that I use to be in and I guess I’m still on the break. I want to go back and I want to learn some more, but I ended up starting a business and this kind of took over everything. But like I said, if I could go back in time and start a business while I was in school, it could have changed everything. I could have learned a lot quicker and make less mistakes. I’m hoping to teach that to a lot of the people that come out to the event.

Where do you see your business in the next five years?

I think everyone should do more of what makes them happy and you can learn more about me through johnnycupcakes.com.

This story has been changed at the request of the source on Tuesday,  June 23.