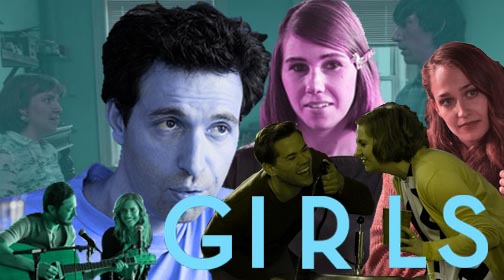 Season 4 of “GIRLS” left viewers satisfied while simultaneously begging for more. Sailed by the Captain that is Lena Dunham and produced by the Hollywood “every-where-man” Judd Apatow, it’s 4th season has come to an end, with a 5th on the horizon.

“This season of GIRLS, is the girls making smarter decisions and realizing life is still hard,” said Dunham in January, during an HBO “On Set” special, and she wasn’t lying.

Hannah’s (Dunham) attempt at graduate school would ultimately flat line. Marnie’s (Allison Williams) musical and sexual relationship with Desi, at first an optimistic life venture, is thrown off by his irrational spending and manipulation. Shoshanna’s (Zosia Mamet) sudden realization once graduating from NYU that jobs are not promised, even with a college degree, is lived. Jessa’s (Jemima Kirke) continued controlling of the people around her, even if she doesn’t realize her effect, is finally called out. Season 4 is certainly full of it’s “growing up” moments for the crew.

From the season opener “Iowa,” it’s apparent that viewer’s attitudes towards the show’s main characters would be further befuddled.

How can viewers fall in love with a set of characters so flawed and “off the wall?”

It’s simple; the set of girls are so pure and opened in their most revealing human elements that it makes their relate-ability as a viewer both rewarding and thought provoking.

Each character in herself displays a element of adult livelihood, in a different form of social or physical and emotional expression. As a viewer, it’s easy to watch season 4 of “GIRLS” and pull a different human element out of each character, especially a set of characters developing and growing in the “millennial” time frame that is relatable to viewers between the ages of 18-35.

Hannah moves past her relationship with Adam and has a new job as a substitute teacher in New York which she enjoys. Marnie and Desi are done and Marnie looks to start her promising career as a solo artist. Shoshanna might be on her way to Tokyo, leaving behind her boyfriend for a realistic career opportunity. Jessa comes to realization following the delivery of Caroline’s baby, in which she convinces her to use modern medicine to save her baby, that she wants to become a therapist.

The ending of season 4 is a great stride into a possibly more rewarding timeframe within the characters lives, with season 5 likely opening optimistically for the group as a whole.

1) Hannah is in a new relationship!

Adam and Hannah are over (sad inside, but it was for the best), but Hannah has a new boyfriend to conclude the season!

It was apparent from the beginning of the season that once Hannah was off for Iowa, things would falter with Adam.

At dinner, in the season opening scene, Adam toasts, “To Hannah, taking the next step in a series of random steps. How strange our journey is through life, we try to inject it with meaning but at the end of the day all we have are… days,” says Adam. A very bleak and hollow “going away toast” to your girlfriend who’s leaving for graduate school.

Before Hannah leaves for Iowa she asks Adam, “Should we go over the plan?” Adam responds, “The plan is there is not plan.” “That works for me as a plan” says Adam, to which Hannah responds, “It’s a plan then.”

Following a very dull sex scene between Hannah and Adam, the last real interaction between them before Hannah’s departure, it’s visible that Hannah is not to comfortable with her and Adams status.

This would be a continuing theme through out the entirety of the season, with its limit being pushed to the max following Hannah’s dropping out of school and return to New York. Only to find Adam with the incredibly cynical Mimi Rose.

Hannah eventually works her way around the gripping “want” for her and Adams relationship, denying a Mimi Rose-less Adam, to conclude the season.

To close, Hannah is seen walking hand and hand with fellow teacher Fran, sharing a kiss with him. It’s awesome to see Hannah has moved on, and her relationship progression should be interesting from here on.

2) Soshanna in Tokyo is going to be pure gold.

After graduating from NYU Soshanna is at first too optimistic about he chances at landing a susceptible job to her high standards. A complete miscalculation of honesty within her first interview derails her first job opportunity, and bombing her second interview in episode 4 “Cubbies” is a harsh reality of what future job interviews might be like for graduating students.

Following some personal growing within herself while helping Ray in his political campaign, Shoshanna finds herself picking a job opportunity in Tokyo over staying at home with her boyfriend; a true moment of growth, choosing her career over a not too promising and young relationship.

Ray grills Desi at the cafe, describing the controlling grip Desi has on Marnie. It seems Desi got the point, skipping out on their show for their label.

Marnie is able to perform the show and knocks it out of the park, possibly opening the door for Marnie’s solo career.