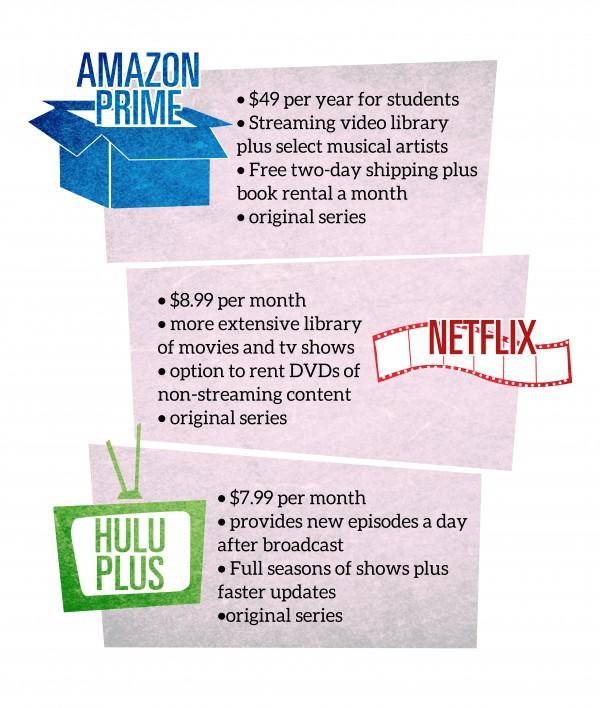 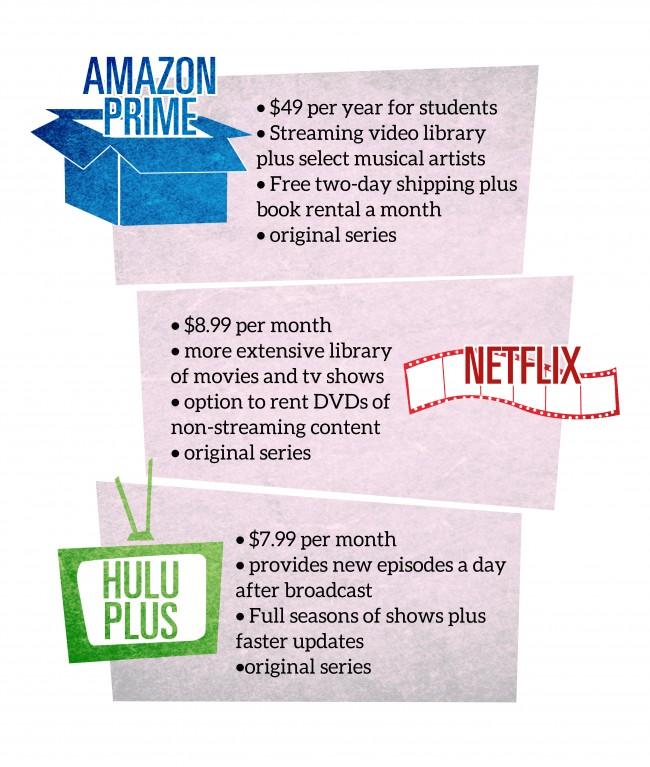 Between Amazon Prime, Netflix and Hulu Plus, it may be hard to figure out which streaming service is worth the money. Each service offers something a little bit different and choosing a service depends on a few factors.

Many students can’t afford to pay for cable every month and prefer to watch television by binge-watching on streaming services.

When it comes to television, Hulu has the advantage because they offer up new episodes of a series the day after they air on broadcast networks. Additionally, Hulu produces their own series such as “Hotwives of Orlando” and “Quickdraw.”

Netflix and Amazon Prime have begun to stream their own original series that have received mass amounts of critical praise as well as Primetime Emmy and Golden Globe awards. Netflix’s “Orange is the New Black” won seven Emmy’s total, including Outstanding Lead Actress in a Comedy, Outstanding Writing and Outstanding Directing. “Transparent” won a Golden Globe for Best Actor in a Television Series – Comedy or Musical.

For those who frequently purchase items from Amazon and own a kindle, Amazon Prime is the best service to buy. The two-day shipping is incredibly convenient and the offer of one free book rental a month is a great service to have access to.

For TV lovers who don’t have cable, Hulu Plus is the best choice. They offer full seasons of many current shows that fans can catch up on and they have new episodes sooner than Netflix and Amazon.

For lovers of movies as well as television, Netflix is the one to buy. The services’ catalog of titles is pretty extensive compared to Hulu and even if something isn’t streaming, viewers have the option to rent DVDs for an added cost.

All three services have trial periods, where viewers can test out each service to see if they like it or not. Amazon’s period is 30 days and offers access to its streaming service. Netflix’s trial is also 30 days with unlimited streaming. Hulu Plus currently offers a 30 day free trial, but it’s only for a limited time. Their regular trial periods usually last a week, with the option to extend if customers recruit friends to sign up for a free trial as well.

Each streaming service has a certain advantage over the others, but when it comes to deciding which to buy, it all comes down to the person and what they are looking for.

As for students, Amazon Prime is the way to go, as it is the only streaming service to currently offer a discount for those enrolled in college.